Noxopharmâs DARRT (Direct and Abscopal Response to RadioTherapy) program is the central element of the companyâs aim of establishing its key drug candidate VeyondaÂ® (NOX66) as a vital aide to radiotherapy at multiple stages of the disease continuum.

Noxopharmâs NOX66 DARRT clinical program was designed to test the ability of its key drug candidate to enhance an immunological response to palliative (non-ablative) dosages of radiotherapy, in which low-dose radiation was used for the activation of local inflammatory and immune responses in a single irradiated tumour.

NOX66 was designed to enhance that response as well as expand it to all tumours in the body whilst its capacity to increase handling of the bodyâs adaptive and innate immune cells.

Noxopharmâs DARRT-1 study is a Phase 1b, open label, non-randomised study of VeyondaÂ® (NOX66) in combination with palliative radiotherapy in which patients with mCRPC were enrolled who had exhausted all other available treatment options; in general, they were suffering from significant pain, had poor quality of life, and had a life expectancy of about 6-8 months.

The Study includes NOX66 administered to patients daily for up to fourteen days with low-dose RadioTherapy given on five days (five fractionated doses) to between one-two measurable lesions during NOX66 administration. The patients were then followed up after six, twelve and twenty four weeks. 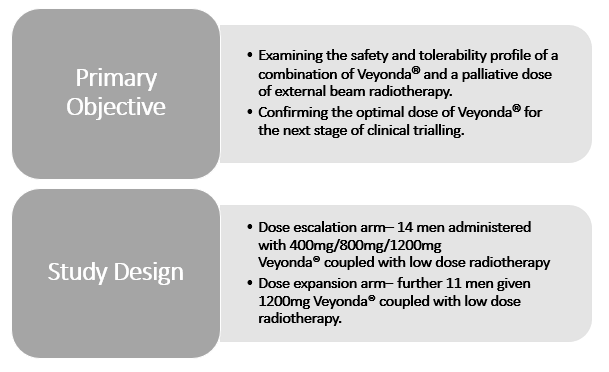 A total of 25 patients received low-dose (20Gy) palliative radiotherapy in combination with VeyondaÂ® (NOX66) at a concentration of 400mg/800mg/1200mg, for alleviation of pain symptoms, with little or no expectation of the drug changing the course of the disease.

Of the 25 patients, 16 patients completed the study and 15 were measured radiographically while 9 patients either had withdrawn, died or been lost to follow-up.

The key point to note is that 10 of 15 (66 per cent) men at the end of the study had reacted to treatment with stable disease or better at six months following start of treatment (as determined radiographically) and with considerably lower levels of pain.

There stands a multi-billion-dollar market opportunity & a significant global unmet need with presently 360,000 men across the globe forecasted to die from prostate cancer each year, and of those men, with 100,000-plus in Australia, U.S. and Europe.

Noxopharm, with an aim to transform cancer treatment, intends to pursue this market opportunity with all its vigor, in its mission to bring to the market a versatile treatment- VeyondaÂ® (NOX66) that could be a turning-point in existing cancer treatments.

Noxopharm is confident that NOX66 DARRT treatment regime would also be applicable to several other solid tumours types like lung, breast, colorectal and ovarian cancers given that idronoxil (active ingredient in VeyondaÃ¢ ) targets an oncogene that is common to most cancer forms.