Recently, we have covered an article on Renascor Resources Limited (ASX: RNU), which could be beneficial for the market players. Readers can click here to view the content.

Northern Star Resources Ltd Soared by 6.456% Due to the Release of June Quarter Results.

Northern Star Resources Ltd (ASX: NST) recently released its results for June 2020 quarter, wherein, the company stated that it has generated underlying free cash flow amounting to $217.9 million from the sale of 262,717oz. This brought total sales for FY20 to 900,388oz while gold produced stood at 905,177oz. The company announced to pay FY20 fully franked interim dividend of A7.5 cents per share on July 16, which was postponed when the company suspended its guidance.

The company also drew down an additional A$200 million in debt during the quarter ended March 2020. However, the company has repaid that A$200 million on 6th July and reduced its corporate bank debt to A$500 million.

Perseus Mining Limited Rose by 5.618% on the Australian Securities Exchange.

Perseus Mining Limited (ASX: PRU) has been added to the S&P/ASX 200 Index, which became effective on 22nd June 2020. In another update,

It was mentioned that Perseus Mining Limited (ASX: PRU) and Exore Resources Limited (ASX: ERX) have entered into the Scheme Implementation Deed under which it is proposed that Perseus (or a subsidiary of Perseus) would be acquiring 100% of the issued share capital of Exore by way of scheme of arrangement.

During the quarter ended March 2020, the company maintained a targeted cash margin of over US$400 per ounce of gold produced, which generated notional cash flow of around US$24 million from operations. 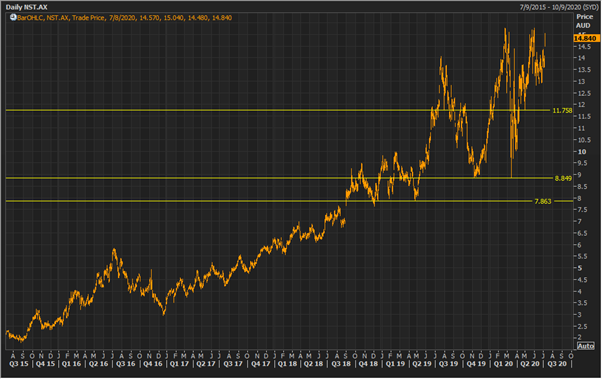