In our article on Directorsâ Interest, we mentioned that any company acts majorly through two pillars- its shareholders and its Board of Directors. While shareholders keep the company functional by making financial investments, they ideally do not have a role to play in the management of the company. Their stance would be fruitful only when the Directors and the Board conduct a robust corporate governance and catalyse the operations of the business. Interestingly, Directors are appointed by the shareholders, hence it is safe to believe that both these vital players are inter-dependant on each other.

In this article, we discuss the diverse online retailer, Kogan.com Limited (ASX: KGN), the Group which posted decent annual results in July, with a 16 per cent leap in its gross profit, after it had slumped to 10.8 per cent in 1H19. Besides these results, the companyâs directors and co-founders, Mr Ruslan Kogan and Mr Daniel Shafer have been on the good books of investors, getting Koganâs momentum back on track.

Sale of Shares Associated with Directors

On 23 August 2019, Kogan confirmed the sale of shares by entities associated with its co-founders, Mr Ruslan Kogan and David Shafer, KGNâs CEO and CFO respectively, worth approximately 5.2 million. This reflects almost 5.6 per cent of the shares on issue and a minor portion of their respective shareholdings. This incident took place a day after the Director of the company, Mr Harry Debney sold a portion of shares in Kogan, for the purpose of providing funds to aid in tax obligation settlements.

The management of the company has been constantly discussing the growth prospects. The sale of director shares enables an increase in the holdings of the other shareholders, which means an increase in the ownership levels. Companyâs Chairman, Mr Greg Ridder stated that even after diversifying a portion of their investments, the Directors have retained a high ownership interest in Kogan.

Mr Kogan and Mr Shafer, committed to their business and shareholdings, confirmed that they would not sell any further securities before the release of KGNâs FY20 financial results. Their shareholdings remain to be the highest ownership levels in the market.

On 20 August 2019, the company released its financial results for the full year ended 30 June 2019, highlighting the fact that it had surpassed half a billion in Gross Sales and delivered double digit earnings growth.

For these results, the performance of Kogan Marketplace, which was launched in March 2019, cannot be missed. The platform delivered gross sales of approximately $12 million in the final three months of the 2018-19 year, or $1.5 million in revenue for the company. In July 2019, the platform had hit gross sales of $7.5 million. 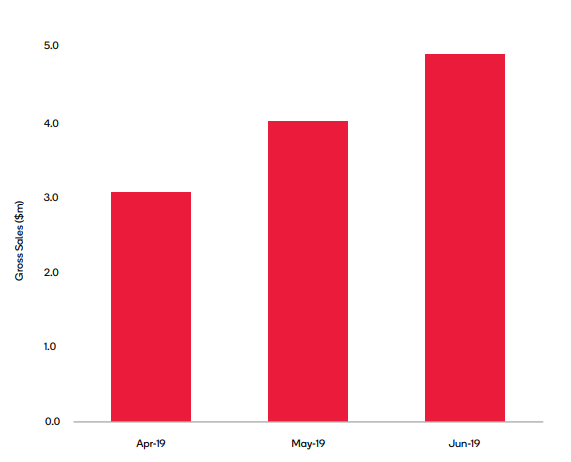 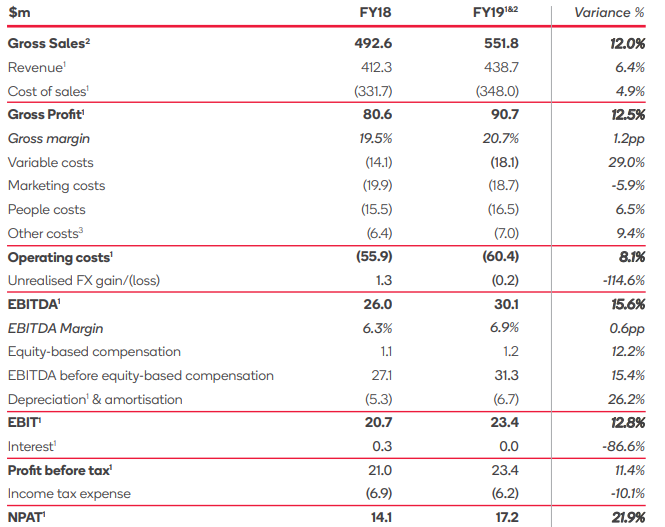 Dividends and Issue of Shares

The company declared a fully franked final dividend of 8.2 cps, resulting in 14.3 cps of total dividends for FY19, up by 10 per cent on pcp. The record and payment date for the dividend are 27 August 2019 and 14 October 2019, respectively.

Drivers of the FY19 Result

The companyâs good performance in the second half of 2018-2019 is on a roll through July 2019 as well, thanks to the its nascent Marketplace division. The platform achieved $1.5 million in commission-based revenues during the year, and its introduction has been regarded as transformational step for KGN. In the year, KGN bagged 221,000 Active Customers and had 1,609,000 customers in its diverse kitty as at 30 June 2019.

The Exclusive Brands had a stupendous Y-O-Y revenue growth with an increase of 41.6 per cent on pcp and represented almost half of overall Gross Profit in FY19. The Kogan Mobile platform welcomed new customers, the base growth being 24.4 per cent with its Commission-based revenues growing by 9.8 per cent on a Y-O-Y basis. The Kogan Internetâs base soared up by 273.2 per cent during FY19.

Kogan Insuranceâs Commission-based revenues zoomed up by 144 per cent on a Y-O-Y basis. Kogan has been engaged in paid marketing and promotion activities, which have been fruitful for the company, and gained traction in assisting Partners for the same. It also invested in enlarging its warehousing footprint to 13 fulfillment centres.

The Kogan Money Home Loans, launched in 2QFY19, was accoladed at various platforms.

Keeping its growth momentum on, the company would launch multiple verticals in 1HFY20- Kogan Money Credit Cards, Kogan Money Super, Kogan Mobile New Zealand and Kogan Energy. This indicates that the company is on track to grow its Active Customer base as well. Even though no formal earnings guidance was provided for FY20, the good start to 1HFY20 with Gross Sales growth of 18.3 per cent with Marketplace Gross Sales of $7.1 million and Gross Profit growth of 32 per cent on a Y-O-Y basis is a healthy sign for KGNâs business and investors.

By the close of market trading on 23 August 2019, the KGN stock quoted A$5.720, trading down by 2.22 per cent with a market capitalisation of A$549.66 million and approximately 93 million outstanding shares. The YTD return of the stock has been 67.62 per cent.

Given the optimistic present and future stance of the company, and the involvement of its Directors in rightly contributing towards the companyâs growth, the market hopes for more good performances and growth-oriented moves from the company. Besides this, the stock behaviour and investor sentiment towards KGN would be an interesting watch.

CLICK HERE FOR YOUR FREE REPORT!
Tags:
consumer ASX: KGN
All pictures are copyright to their respective owner(s).Kalkinemedia.com does not claim ownership of any of the pictures displayed on this website unless stated otherwise. Some of the images used on this website are taken from the web and are believed to be in public domain. We have used reasonable efforts to accredit the source (public domain/CC0 status) to where it was found and indicated it below the image.