Will Potential Travel Bubbles Bring a Stroke of Luck for Australian Travel Industry?

The year 2020 is just halfway through, and the world has already gone through numerous hardships, ranging from airplane crashes, bushfires, Hong Kong-China spat, earthquakes and the gravest of all – COVID-19 Pandemic. While there is hardly any sector unscathed by coronavirus fallout, few industries have suffered more than others, including travel and tourism.

Coronavirus-induced restrictions delivered massive blow to the profit-making travel sector, revealed Tourism Research Australia in its latest survey results. The industry lost about $6 billion in tourism spending with double-digit falls in overnight stays and visitor trips amid the closure of international and domestic borders in March 2020 quarter.

The impact of COVID-19 pandemic was apparent in March 2020 domestic and international visitor numbers, which plummeted by 39 per cent and 60 per cent, respectively. 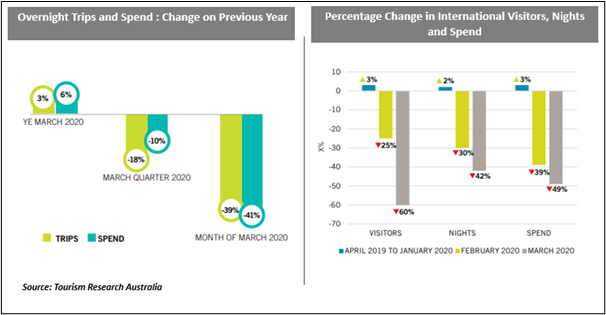 As per the Department, April 2020 observed a year-on-year fall of 93.6 per cent in passengers carried on Australian domestic commercial aviation, with an yearly decline of 98 per cent in international scheduled passenger traffic.

Besides, ABS also recorded a largest ever year-on-year decrease of 99.7 per cent in short-term visitor arrivals in April 2020 amid coronavirus driven restrictions on international travel.

The impact of such restrictions is also evident in stock performances of travel stocks, that have yielded negative returns over the last three months as demonstrated in the below figure: 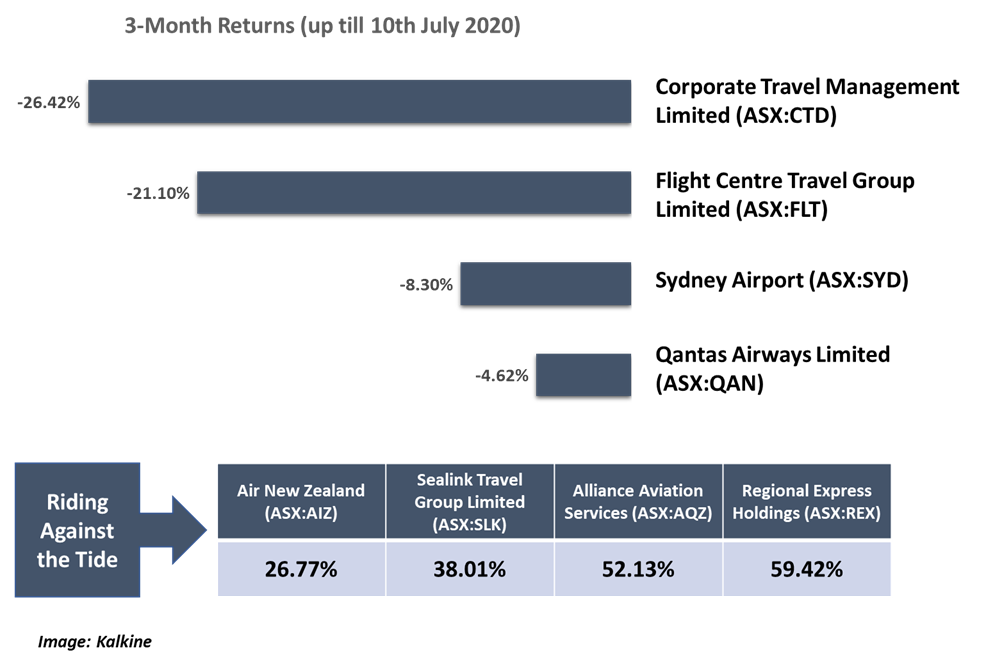 No wonder, travel industry bore the maximum brunt of coronavirus-induced shutdowns, which triggered massive layoffs and revenue hit to companies operating in the related space. However, emerging signs of revival in the domestic travel industry and potential resumption of international travel can turn the tables around, enabling the hard-hit industry to stand back on its feet.

Though Australia has not yet recommenced international travel operations, the nation is amongst safe travel choices of several other nations eyeing travel bubble or quarantine-free travel in the near future.

Having said that, let us quickly discuss scroll through Australia’s potential travel status with different regions:

Much-talked about Trans-Tasman Travel Bubble with Kiwi Land is likely to be executed in September this year, hinted Tourism Minister Simon Birmingham last week. He notified that quarantine-free travel between New Zealand and Australia could commence within the next three months despite new COVID-19 cases flaring up in Victoria.

However, New Zealand PM Jacinda Ardern has lately hinted that the travel bubble is expected to be rolled-out on a state-to-state basis rather than at federal level given the spike in Victoria cases. Besides, she has thrown the ball in the neighbor’s court, highlighting that Kiwi Land is already prepared while Australia has to make some calls regarding their readiness.

Australian PM Scott Morrison has recently signaled over sooner than expected execution of international travel corridor with the world’s most powerful passport holder, Japan. Recently, Australia and Japan have been tagged amongst the top 10 countries having most powerful passports, with latter securing the first rank in Henley Passport Index.

Mr Morrison is quite optimistic over the reopening of international corridor with Japan in the near future, as both the countries intend to resume travel with destinations where the pandemic has been brought under control. Japan has opened similar negotiations with Vietnam, Thailand and New Zealand while it plans to initiate talks with ten more Asian economies by mid-July.

The Indonesian government is also drafting plans to launch a travel corridor with four countries, including Australia, Japan, South Korea and China to boost domestic tourism. The country is anticipated to offer in-city tourism packages loaded with health and safety protocols for foreign travelers. While, much depends on the containment of coronavirus cases in Indonesia, which is still observing a spike in new infections each day.

Besides Indonesia, Thailand was also initially seeking travel bubbles with New Zealand, Hong Kong and Australia, the plans of which are now delayed amid a resurgence of COVID-19 cases in these countries.

Australia is appearing on the safe travel destination list of several countries, particularly the EU and the UK. The nation was recently listed in the catalogue of fifteen safe travel countries that would be permitted for leisure or business travels in EU member states.

Moreover, Australia also surfaced on the potential air-bridge plan of the UK, which encompasses 75 countries from where visitors would not have to go through mandatory quarantine from 10th July onwards.

While these travel corridors are boosting prospects of gradual resumption of international travel, the second wave of infections emerging in Victoria and other nations can act as a roadblock in the path to revival.

AU’s second-most populous state is continuing to observe fresh COVID-19 cases, which has induced the Federal Government to place a cap on international travels from ~7,000 to ~4,000 per week. The government has recently decided to lower the number of inbound flights by one third to reduce the coronavirus spread from overseas.

Must Read! Australia at risk of next wave of infections, Victoria announced $534m business support package

Besides, the government’s recent warning for its citizens to avoid traveling to Hong Kong amid possibility of "arbitrary detention" under new national security law can potentially hit the travel industry. However, a recent report from the Australian China Business Council has indicated that social media could reignite Australia’s multi-billion-dollar Chinese tourism market.

While international travel industry has fallen off a cliff amid coronavirus-driven travel restrictions, execution of travel bubbles could be a game changer for the sector, provided the second wave of infections is successfully contained. Moreover, reopening of Queensland borders after months of lockdown is rekindling hopes of a revival in domestic tourism, with the sunshine state being one of the most popular travel destinations.