The company has been making waves in the ASX pot stock space through its strategic move into Hemp CBD.

Confirming that its agronomy, farm management and agtech expertise can be successfully applied to industrial hemp and has been recognised by industry participants, CLI executed a Supply Agreement in August 2019 with Deschutes Labs , a new industrial hemp processing facility located in Central Oregon, USA.

As per the Agreement, Logical Cropping LLC, CLI’s wholly owned subsidiary would deliver Biomass on a weekly allotment basis from 20 October 2019. With payments to follow each delivery, the total Supply Agreement value is reportedly $15.4 million (provided the completion of deliveries).

On 28 October 2019, the Company announced that shipments have begun under the Deschutes Labs supply agreement.

With the harvest timeline on track, the Company made its first Biomass Shipment under the Agreement to Deschutes Labs, which aims to offer its customers with consistent and abundant CBD products through its relationship with CropLogic. In September 2019, the Lab began operations and is licensed to manufacture food grade extracts. Further, it is operated and designed in accordance with ISO 9000 and GMP standards. 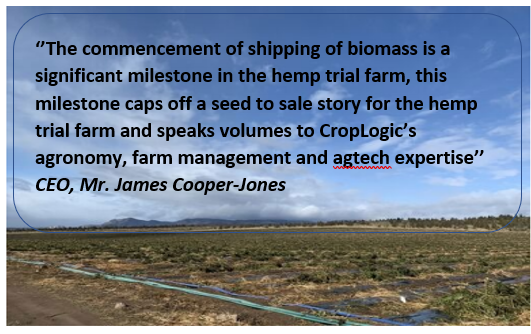 CLI notified that even though there is an element of ‘dialling in’ of machinery and processes to the extent that would be commonly expected for a project such as the trial farm, the harvest is reportedly progressing well:

Moreover, CLI’s warehousing procedure, which includes bagging the biomass into supersacks (Bulka Bags) weighing, tagging and storing for sale, is now being implemented. 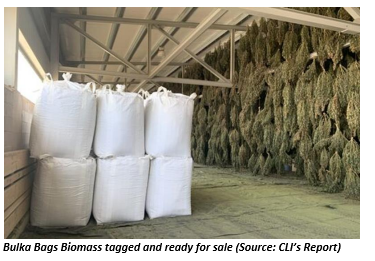 The Course Of Events

Hemp industry and the cannabis space has been gaining a lot of traction since the past few months in Australia, especially after the recent ease on recreational cannabis in the ACT, which followed the historic legalisation of medicinal cannabis in February 2016.