How are banks reacting to increased gambling practices?

There has been a growing regulatory and Government concern over gambling in Australia and other parts of the world and banks are taking several steps to limit the gambling practices to the best possible extent.

Before we talk about how the banks are addressing the issues of gambling and lottery, let us understand the meaning of the terms, which are often considered similar in nature, but are quite distinct in the literal sense.

Under gambling, participants make predictions in a certain field as per their knowledge and set aside money based on the same. The lottery is more like a game of chance, which involves random winning determined by the number of people who participate. It involves choosing a lottery number and buying a ticket. The winner completely relies on the luck factor as the lottery machine picks up numbers randomly and declares the winner. Therefore, we can say that, while predictions play a major role in gambling, lottery purely, is a game of chance.

As per recent media reports, Macquarie has forced a ban on the lottery transactions and gambling on its credit cards. The ban is expected to be implemented in the coming months and will prevent any payments through the credit cards for the transactions that are care classified as gambling under the merchant codes. Many lenders like American Express have already banned gambling on credit cards. According to a few media sources, banks like ANZ have adopted the practice of setting caps on gambling transactions through credit cards to control problems gamblers. The bank does not allow the usage of a credit card after it exceeds the credit limit to restrain customers from using the product irresponsibly. Other banks like Bankwest and Commonwealth Bank charge high interest rates in cash advances on credit cards to limit the gambling practices.

Now let us have a look at few stocks in the gaming industry - CWN, ALL, SGR, SKC

Crown Resorts Limited (ASX: CWN) is amongst Australiaâs largest entertainment groups and operates in the integrated resorts sector. The company recently announced that Perpetual Limited has become a substantial shareholder with a voting power of 5.10%. The company also updated that its subsidiary, CPH Crown Holdings Pty Limited is selling 19.99% of the issued capital of CWN to Melco Resorts & Entertainment Limited.

Looking at the financial side of things. For the half year ended 31st December 2018, the company reported NPAT attributable to the parent of $174.9 million, up 9.9% before significant items and down 26.7% after significant items on the prior corresponding period. Reported EBITDA amounted to $391.8 million, down 2.1% on the prior corresponding period. During the period, the company also declared an interim dividend amounting to 30 cents per share. Net operating cash was $382.3 million as compared to $368.5 million in pcp. 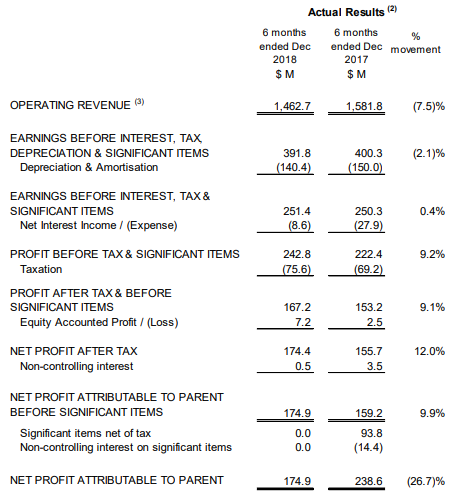 Aristocrat Leisure Limited (ASX: ALL) is primarily engaged in the design, development and distribution of gaming content, platforms and systems, including the electronic gaming machines, casino management systems and digital social games. The company recently announced the change in the interest of one of the Directors, Trevor John Croker. The Director acquired 116,390 LTI Performance Share Rights at nil consideration. 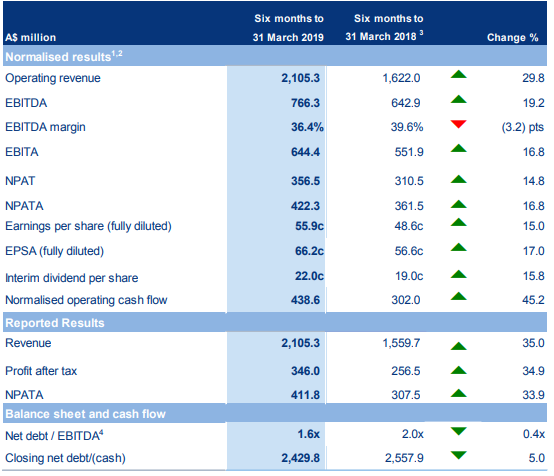 The Star Entertainment Group Limited (ASX: SGR) is engaged in the management of integrated resorts with gaming, entertainment and hospitality services.

The company lately updated that Commonwealth Bank of Australia and its related bodies corporate ceased to be a substantial shareholder.

In the recent trading and earning update, the company reported that the total domestic revenues for the financial year 2019 YTD have increased by 3.1% on the prior corresponding period. Domestic revenue growth trends softened after the release of the first half results. Based on the revenue growth rates, the companyâs FY19 guidance for normalised EBITDA will be in the range of $550 million to $560 million.

SKYCITY Entertainment Group Limited (ASX: SKC) is engaged in providing tourism, leisure and entertainment services. The company recently updated investors about the issuance of 45,452 ordinary shares for an average price of $3.8065 per security under the on-market share buy-back programme announced in February 2019. In another update, the company revealed that its subsidiary, SKYCITY Malta Limited, is partnering with Gaming Innovation Group Inc to extend its online casino gaming platform in New Zealand.

During the first half of the financial year 2019, the companyâs reported revenues from ordinary activities stood at NZ$411.4 million, up 0.3% on pcp. Reported net profit attributable to security holders amounted to NZ$82.8 million, down 11.4% on pcp. Reported EBITDA for the period was $148.3 million, down 8.2% on the prior corresponding period. The company also declared an interim dividend of NZ$0.10 per security. 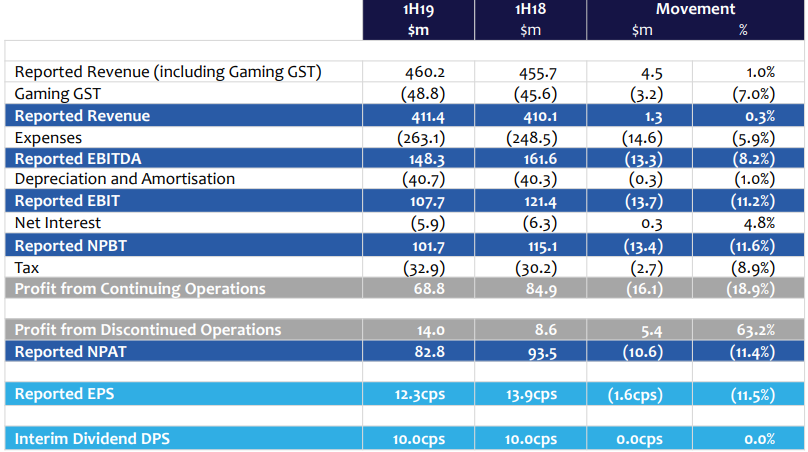 Tags:
consumer SKYCITY Entertainment Group Limited (ASX: SKC) Crown Resorts Limited (ASX: CWN) Aristocrat Leisure Limited (ASX: ALL) ASX: SGR
All pictures are copyright to their respective owner(s).Kalkinemedia.com does not claim ownership of any of the pictures displayed on this website unless stated otherwise. Some of the images used on this website are taken from the web and are believed to be in public domain. We have used reasonable efforts to accredit the source (public domain/CC0 status) to where it was found and indicated it below the image.