Diversified player, BPH Energy Limited (ASX: BPH) holds a significant stake in oil and gas exploration company, Advent Energy Ltd that has an attractive portfolio of exploration and near-term development assets in both onshore and offshore Australia. BPH is Advent’s second largest shareholder with a direct share of 22.6 per cent. 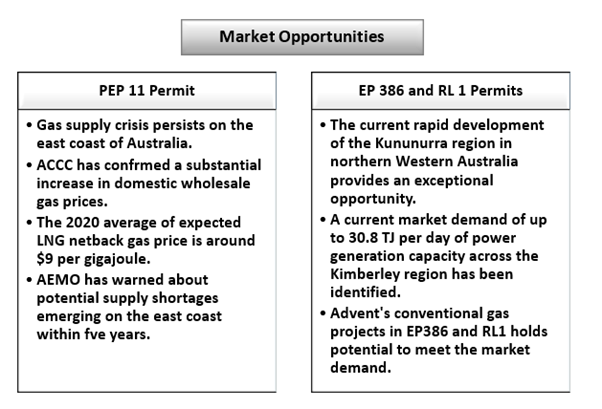 Advent Aiming to Drill a Well at the Baleen target

The key objective of Advent is to drill a well at the key drilling prospect, the Baleen target, within the PEP 11 permit in 2020.

The company has recently terminated the RL Energy JV Agreement for PEP 11, and the JV is now focusing on the drilling of a well at the Baleen prospect subject to approvals of regulatory authorities, including NOPTA.

The 2004 seismic data was reprocessed in 2010 via a geochemical investigation that endorsed drilling of a potential exploration well in PEP11. The geochemical report supported that in comparison to the background samples, the area around the potential drilling site on the Baleen target seems best for hydrocarbon impact.

Moreover, the report discovered that the Baleen looks best to carry a higher prospect of success than other targets within the permit.

A review of 850 wildcat wells was performed subsequent to geochemical surveys that indicated that 79 per cent of the wells drilled in positive anomalies ended up in commercial oil and gas discoveries.

Advent conducted a high resolution 2D seismic survey in April 2018, covering about 200-line km to support the drilling of the Baleen target, about 30km to the southeast of Newcastle. In a review of previous seismic data, a drilling target at a depth of 2150 metres subsea on the Baleen prospect was identified.

The report on this drilling target demonstrated that the Bowen Basin’s Permian aged section has producing conventional gas fields at a parallel time and depth to PEP 11 permit at the Permian - Triassic age boundary.

In addition to PEP 11 permit, the company holds 100 per cent of each of EP 386 and RL 1 (through its subsidiary Onshore Energy Pty Ltd) in the onshore northern Australia’s Bonaparte Basin, which is a highly prospective petroliferous basin, with significant oil and gas reserves.

Most of the Bonaparte basin is located offshore, encompassing 250,000 sq. km, relative just over 20,000 sq. km onshore. The potential of the Bonaparte Basin is apparent from the established oil and gas fields in both the offshore and onshore portions of the basin.

Advent has been granted a renewal of RL 1 in the Northern Territory by the NT Department of Primary Industry and Resources for a five-year term concluding in July 2024. The company will apply further to extend the EP 386 permit to Western Australia’s government.

In addition to Advent, BPH holds a considerable stake of 4.56 per cent in the medical device technology company- Cortical Dynamics Ltd, that has developed a breakthrough system for monitoring brain response towards anaesthetic agents reliably.

Cortical’s core product is BARM or Brain Anaesthesia Response Monitor, a paradigm busting technology, whose competitive advantage has been recognized by prominent anaesthesia experts across the world.

Cortical’s technology holds the potential to be applied to other EEG based markets, including drug discovery, neuro-diagnostic, developing Brain computer Interface market and drug evaluation. It can also be used for tranquiliser and pain response monitoring for trauma patients in ICUs (intensive care units). It is protected by five patent families in numerous jurisdictions across the world, comprising 22 granted patents.

Cortical has received both the CE mark and TGA approval and has now initiated its sales campaign. Moreover, its Korean distributor, Globaluck has obtained the KGMP certificate of approval for BARM (Class II Medical Device) in September.

There is significant market opportunity for Cortical’s BARM in Europe’s Total Intravenous Anaesthesia (TIVA) market, wherein a large number of major surgery cases with anaesthesia are reported every year.

It is worth noting that BPH is well-positioned to make great strides by capitalising on its high-profile investments in different sectors.