Patagonia has secured exclusive rights over the phenotype via execution of a deal with Spanish cultivator, Calpernia Planters Limited.

To maintain exclusivity, Patagonia has agreed to buy the minimum 3 million seeds in 2020, 10 million in 2021 and 15 million in 2022 (capped onwards) from Calpernia under the terms of the deal.

Recently, Patagonia has also acquired an additional 24 CBD and Hemp strains from a grower in Colombia, expanding its existing collection.

Derived from Italy, Carmagnola Industrial hemp strain has been cultivated for over fifteen years and is grown for fibre production and CBD oil extraction and resin. Its hemp seeds are dioecious, holding the ability to grow both and female and male plants.

In addition to having a historically low THC reading below 0.5 per cent, the hemp strain includes a high CBD content of 7 to 9 per cent, that makes it optimal for CBD oil extraction and resin. The hemp strain also holds the ability to produce high-grade medical CBD flower. 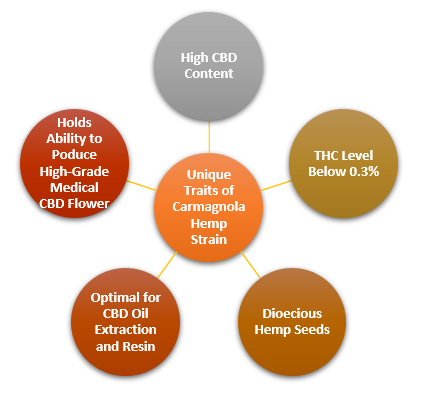 The high CBD phenotype of Carmagnola hemp strain acquired by Patagonia was identified by the grower following cultivation, testing and an extensive search of thousands of Carmagola plants.

The discovered phenotype considered as unique, carries extremely high levels of CBD relative to traditional Carmagnola (and most other hemp strains) while retaining THC levels well under 0.3 per cent.

The lab confirmed THC reading of identified phenotype (0.11 per cent) is significantly lower than the THC limit of United States Department of Agriculture and many other regions (0.3 per cent), implying that it can be sold as hemp worldwide with minimal risk to the cultivator of surpassing THC limits. Moreover, the CBD reading is in the high range at 18.4 per cent, particularly in comparison to those with low THC values.

The newly discovered phenotype produced a Certificate of Analysis (COA) and was tested by the 'Centro Tecnológico Nacional Agroalimentario Extremadura (CTAEX). Take a look at an extract of the COA result and cannabinoid makeup below:

The COA results have already been sent by Patagonia to major distributors, licensed producers and grow shops across the world. Moreover, Patagonia has obtained considerable interest from them to supply the genetics for 2020 cultivations.

Recently, Patagonia has finalised due diligence on Gibraltar-based Calpernia Planters Limited, that holds several licenses which allow it to export and import cannabis and hemp-related genetic material, though with a THC limit of 0.3 per cent or less.

Calpernia Director, Mr Michael Trinidad holds numerous seed and cannabis cultivation licenses in Spain, that allow him to export and cultivate cannabis and hemp genetic material like clones and seeds but with a limitation on THC content below 0.3 per cent. Mr Trinidad, who has an agreement with Calpernia, is contracted to exclusively cultivate the genetics in Spain and supply them under his license.

The current capacity allows the Spanish farm to supply feminised seed close to 20 million to 30 million by mid to late 2020, along with an ability to scale into the year 2021 and beyond. The distribution deal terms permit Patagonia to start the sale of the newly discovered phenotype under hemp license of Calpernia.

Genetic cuttings or clones of the recently identified phenotype is likely to be supplied in the market by Q1 2020, while feminised seeds are expected to be marketed by Q3 2020. It has been confirmed by Patagonia that the phenotype is destined for use in the medicinal space and will be marketed as medicinal strain.