Global Petroleum Limited (ASX: GBP), an Australian Securities Exchange listed oil and gas explorer, announced on 21st May 2019 that the Administrative Tribunal in Rome recently rejected appeals against the Environmental Decrees for its applications in the Southern Adriatic.

Post receiving these Environmental Decrees in 2016 and 2017 the company marked a number of appeals subjective to the Decrees by various parties, in respect of which the latest Hearings took place in the month of January and March 2019 respectively.

As per the company, a total of twelve appeals got filed against the 2016 and 2017 Decrees, out of which eleven of them got rejected; however, the judgement of one appeal by the town of Trani in relation to the 2016 Decrees is pending, and the company expects the judgement to be precedented. Further, as per GBPâs expectation, the pending judgement would follow the previous judgements.

The broader perspective of the appeals revolves around the temporary ban imposed by the Italian Government in the early months of the year 2019, which also includes the companyâs permit applications, for a period of 18 months.

GBPâs Chief Executive Officer, Peter Hill, stated that the recent rejection of most of the outstanding appeals against the companyâs Environmental Decrees clears the consistent view that such appeals are without merit. Mr Hill also mentioned that the company is noticing with interest, the development in opposition to the temporary suspension by the Italian Government on the exploration activities in Italy. 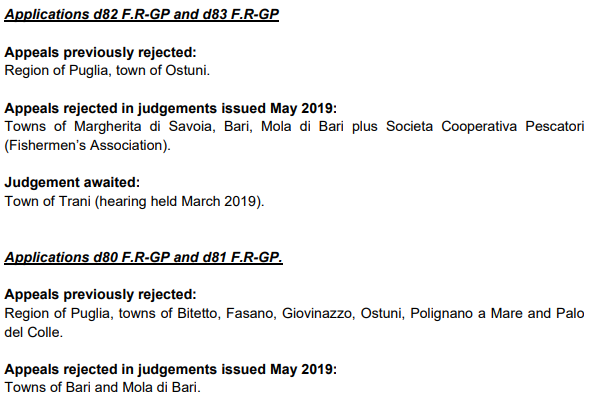 The company had applied and proposed work programme with a budget in August 2013, to the Italian Ministry of Economic Development. The proposed application included the four exploration areas offshore Italy. 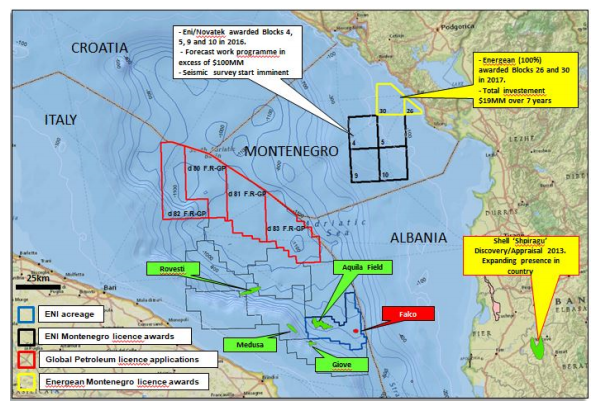 The four exploration area licence application are marked in red contour in the above-shown picture. The company considers that the permit applications lie in an area, which is a substantial prospect for both oil and gas. Southern Adriatic is a proven basin, and various companies such as Eni has developed projects and is currently producing Eniâs Aquilla field is located 30km towards the south of the proposed application area and is depicted in the picture above.

The adjacent areas encompass the Giove, Medusa and Rovesti oil discoveries along with the Falco gas discovery. As per the company, the Southern Adriatic basin continues to be the area of industry activity.

The companies which are currently operating in the basin are planning to spend more on the exploration activities and on the permits (and if granted to the company) will mark a significant milestone for it.