Mineral explorer, Galan Lithium Limited (ASX: GLN), based in West Perth, Australia has disclosed its Activities Report for what has been the most exciting last quarter of the financial year 2019. The company is very keen to tap into the potential of its wholly-owned Hombre Muerto Lithium Brine Project in Argentina located within South America’s highly renowned and abundant Lithium Triangle.

The clean energy revolution is picking up pace and the electric vehicles (EV) are on the verge of massive commercialisation worldwide in the foreseeable future as being anticipated by one and all. Lithium-ion batteries (LIBs) are a key and preferable component in a range of portable electric products (cell phones, laptops, etc.) and EVs, owing to their high energy per unit mass.

With that backdrop, Galan Lithium is one of the companies that is strategically targeting Lithium production to capitalise on the opportunity as the EV industry expands. Therefore, it has been actively evaluating lithium brines within Hombre Muerto over the last seven months. The company’s endeavours so far have been backed by equivalently encouraging results that are briefed in the following article.

Galan Lithium’s centre of focus during the three months ended 30 June 2019 was the completion of the maiden diamond drilling campaign at the Candelas Lithium Brine Project located in the Catamarca Province, Northern Argentina on Salar De Hombre Muerto. The campaign was successfully and safely executed with no lost time injuries (LTI’s) recorded since the exploration began in January 2019 after the Secretaria de Estado de Mineria – Gobierno de Catamarca, Argentina (the authority that approves drilling permits in Catamarca, Argentina) granted the permits for the same in December 2018. 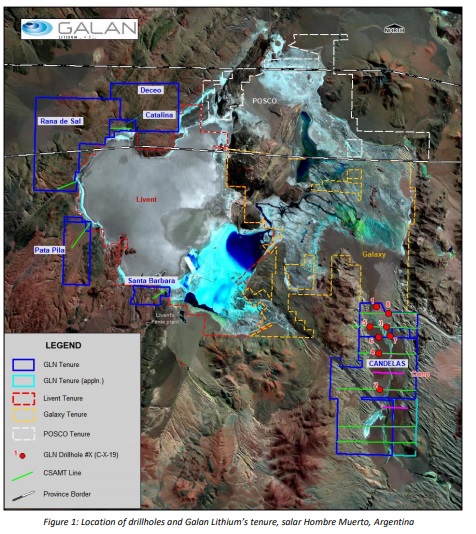 The drilling campaign at the Candelas Project comprised of two stages (Stage I and Stage II) and the results confirmed the presence of high-grade low impurity lithium towards the eastern boundary of the Basin and also indicated a minimum 3.5 km strike and 2.5 km width extent in the northern portion. The details of the drilling under Stage I and Stage II can be READ here.

A total of eight holes were drilled during the whole campaign with the assay results summarised below.

The company announced on 3 July 2019, to have commenced a preliminary investigation into ion exchange technologies for the processing of lithium brines extracted from the Candelas Project. This followed a six-month technical review into alternative processing technologies, and the results of both the studies would be utilised in the Pre-Feasibility Study (PFS).

The due diligence into the suitability of ion exchange technologies is associated with a long lead time and therefore, Galan Lithium is parallelly undertaking other exploration and operational activities that would add value to the project. Besides, the company is also considering going for a more conventional processing pathway involving selective precipitation, evaporation, purification and precipitation of lithium brines to Lithium Carbonate (Li2CO3).

Discussions with potential technology providers possessing expertise in ion exchange recovery from lithium brines is underway, while the company has shortlisted 2 providers to implement bench top test work. Moreover, Galan is assessing precipitation technologies to extract lithium salts and has assigned an Australian technology provider to take up the task.

To maintain quality control over the previous samples, the company is also executing pumping tests at all the drillholes.

These tests mentioned above are to be undertaken over the next few months. With consistent milestones achieved so far, Galan Lithium is well equipped to define and deliver a Maiden Resource Estimate (JORC 2012 compliant) for the northern portion of the Candelas project by Q3 2019 and thereafter begin the PFS study, finally leading to the culmination of the development of the project.

The company has also informed that SRK (Australia), an independent, international consulting company catering to the resources industry, recently paid a visit to the project site as part of their contracted services to oversee the progress and to initiate the process of Mineral Resource Estimation. The contractor also visited the Western Tenements of the Salar de Hombre Muerto where the site access works are being finalised to start the drilling as the permits have recently been granted, as informed on 24 July 2019.

Galan Lithium is all set to kick off its maiden drilling programme over its Western Basin Projects (100%-owned) encompassing five primary targets being El Deceo, Pata Pila, Santa Barbara, Catalina and Rana de Sa, all straddling the border between Catamarca and Salta provinces on the periphery of the Salar de Hombre Muerto.

The permits have been granted to drill a total of 14 drillholes along with five (5) water bores within a period of 18 months. This marks the third phase of drilling within the Hombre Muerto basin, demonstrating the consistent support from the Catamarca authorities as well as a sound relationship with the local communities as Galan continues to offer large scale employment on account of its activities.

The preparatory works are underway for the drilling that would initially be directed towards the Pata Pila and Rana del Sal tenements. The highly conductive anomalies recorded from the previously completed CSAMT (Controlled Source Audio-frequency Magnetotellurics) surveys last year would specifically be examined. 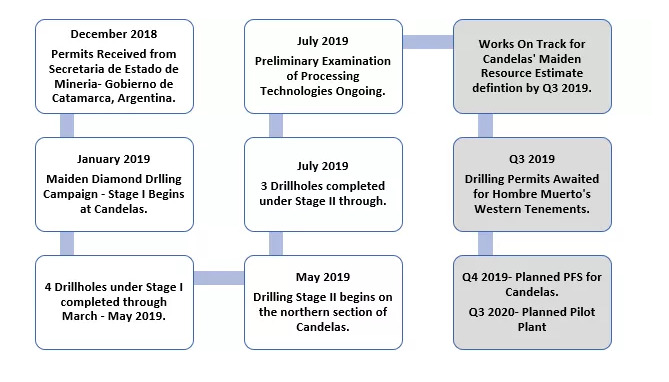 During the quarter, the company reported a cash outflow of around AUD 2.78 million from operating activities including exploration & evaluation costs of AUD 2.55 million and administration & corporate costs of AUD 230K. Meanwhile, the financing activities generated cash inflows of ~ AUD 4.23 million on account of proceeds from the issue of shares. As of 30 June 2019, Galan Lithium’s cash in bank was ~ AUD $ 2.84 million.

Galan Lithium has a market capitalisation of around AUD 24.57 million with approximately 129.33 million shares outstanding. The GLN stock last traded on 31 July 2019 at AUD 0.190. On 01 August 2019, the securities of Galan Lithium were placed on a trading halt pending it releasing an announcement. The halt is expected to last until the commencement of normal trading on Monday, 5 August 2019 or whenever the announcement is released to the market.