The below mentioned have come up with significant updates today (i.e., 27 August 2019). These updates are showcasing how these companies have performed lately. Let’s take a look at these updates:

Australian gold producer, Northern Star Resources Ltd (ASX: NST) has entered into a Bid Implementation Agreement with Echo Resources Limited (ASX: EAR) to acquire all the issued and outstanding ordinary shares in Echo that it does not already own.

As per the terms of the offer, Echo Shareholder will receive a cash offer of A$0.33 for every Echo Share held, which represents a significant premium to Echo’s recent share trading, specifically:

The Directors of Echo have unanimously recommended that Echo Shareholders to accept the Offer in the absence of a Superior Proposal.

On 27 August 2019, Northern Star Resources unveiled its full year results for FY19. For FY19, Northern Star reported an Underlying Net Profit of A$179 million and group EBITDA of A$480 Million. During the year, the Group Resources increased by 31% and Reserve grade increase by 16%.

Australian owned and operated diversified energy company, New Hope Corporation Limited (ASX: NHC) has released its activities report for the quarter ending July 2019. For the July quarter, the company reported total saleable coal production of 3,316K tonnes, 39% higher than the previous corresponding period (pcp). The total coal sales in the July quarter was 3,337k tonnes, 32% higher than the prior corresponding period. The July quarter results were driven by the increased ownership in the Bengalla mine.

Highlights for July Quarter include:

During the July Quarter, the company drilled 29 holes for a total of 3,184 metres across North Surat (Taroom project), New Lenton and Captains Mountain. With this, the pre-feasibility study for the North Surat project is nearing completion.

Prompted by the strong performance of the company, the company’s Board declared a second half dividend of 2.6cps (full year dividends of 4.6cps up 31%) to be paid on 18 October 2019.

During FY19, the company was able to maintain its position as the fastest growing platform provider in percentage terms and witnessed a growth of 54% Funds Under Administration (FUA). As at 23 August 2019, the company had Funds Under Administration of $13.6 billion. During the year, the Platform revenue increased by 36% to $54.1 million while platform expenses increased by 30% to $36.0 million 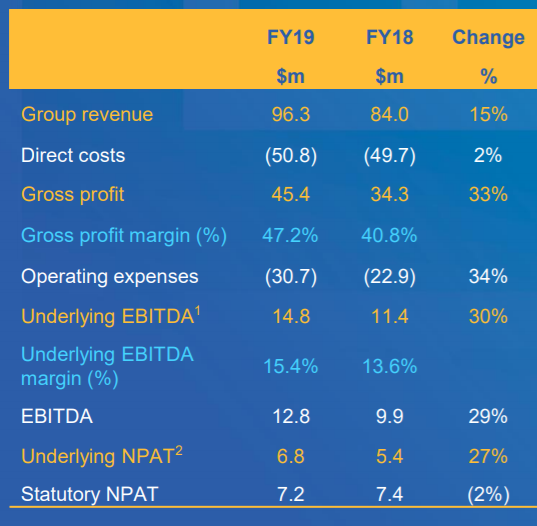 Along with strong financial growth during FY19, the company also achieved some significant milestones:

In December 2019, the company’s operations team completed its largest transition to date bringing across the Fitzpatricks Private Wealth inhouse MDA ahead of schedule.

During FY19, the Agility Applications extended their product capability and developed several new products to support their client needs. In June, the company announced an agreement with Cashwerkz to integrate their term deposit and cash management platform into Agility’s functionality and successfully implemented the Open Markets application and infrastructure solution.

While providing the outlook, the company informed that the future of Australian Wealth Management industry is now taking shape and HUB24 is continuing to move forward with positive tailwinds and unprecedented opportunity for growth.

The company is targeting an FUA range of $22–$26 billion by 30 June 2021, an uplift on its stated target last year. The company is confident it can continue its profitable FUA growth trajectory based on the broad appeal of its platform and managed accounts solution, and its ability to innovate solutions for customers, financial advisers, stockbrokers and investment managers.