Commodity prices show a positive correlation with the global economic conditions, and until recently global miners have seen a plunge in the global economic activities, which is prompting miners like Rio Tinto Limited (ASX: RIO) to adopt strategies to benefit from the commodity cycle.

The share of the company responded to the deteriorating economic conditions, with drop in the commodity prices over the last few months. While the cyclical nature of the commodities is well known, the miners such as Rio Tinto are making strategic decisions to provide superior returns to the shareholders.

Rio forecasts the global economic conditions to improve as it is moving in a cyclical pattern. As per the company, the global growth is tracking the 2015/16 cyclical lows, while major central banks across the globe are becoming more accommodative.

The company assess that China-which is among the top commodity consumer across the globe is demonstrating ambiguous macro indicators. The property and infrastructure sector in China have been providing a cushion for other parts of the economy that are slowing.

The uncertainty over the U.S-China trade war is impacting the manufacturing sector. The overall q/Y GDP of China remains slightly lower than the industry expectation. As per the data, China’s q/y GDP (or Real GDP) stood at 6 per cent in the September 2019 quarter vs 6.2 per cent in the June 2019 quarter However, the street was expecting a growth of 6.1 per cent.

However, the recent development in the U.S-China trade negotiations, which is being called Phase 1 of the trade negotiation, ignited an expectation among the industry that the future growth could be positive, which in turn, could support the commodity prices (excluding gold) in the global market.

All commodities do not perform or trend in the same manner in relation to others at a particular point of time; thus, offer diversification. Rio- the leading global miner has expedited in various commodities such as iron ore, copper, aluminium, diamond, etc.

The higher growth in iron ore prices partly indemnified the fall in demand and prices for copper and aluminium. The global demand growth of aluminium plunged by nearly a one percent in the first half of the year 2019, while the supply remained ample amid sanctions removal on the aluminium giant- Rusal.

The oversupplied market coupled with a fall in demand led to a 12 per cent decline in aluminium on a Y-o-Y basis till September 2019. On the other hand, the macro headwinds and trade concern impacted the market sentiments for copper, which further observed record net shorts. Copper witnessed a 5 per cent decline on a Y-o-Y basis until September 2019.

Despite a large decline in the commodity prices across the globe, Rio managed to provide a YTD return of 24 per cent (as per the closing price of 30 October 2019) and a yearly return of 25 per cent.

The snippet for the other financial metric is below: 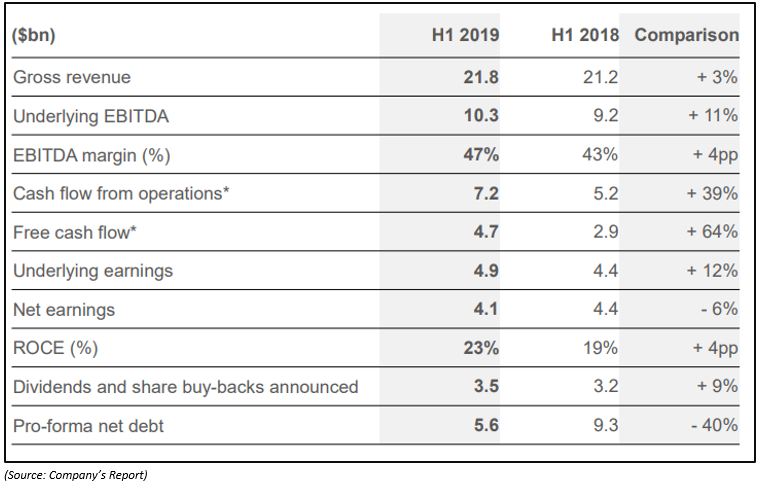 Rio adopts a disciplined investment of capital to take advantage of the commodity prices in the global market. The company’s capital expenditure or capex remained $2.4 billion in the first half of the year 2019, of which Rio had spent $1.2 billion on the sustaining activities and $1.2 billion on the development activities.

The development capital delivered a compounded annual growth rate from 2019-2023 of 2 per cent, and the company plans to shift the timing of expenditure from 2019 to 2020, which as per the Rio’s forecast would be the period of recovery in the economic conditions and in a loop recovery of the commodity prices. 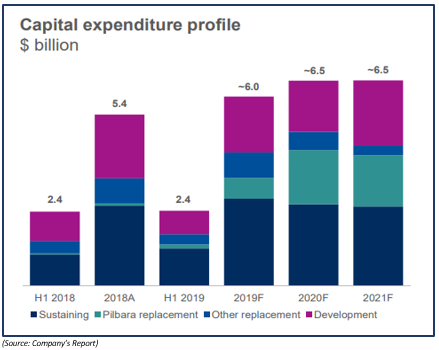 The ultimate result of Rio’s strategy and well-judged placement of capital is beneficial for the shareholders of the company, who have been enjoying the superior returns provided by the global miner.

Apart from the stock price appreciation, Rio delivered bumper dividends to the shareholders to improve the return profile of the company.

The company paid $2.5 billion as an interim dividend to the shareholders, which mark a dividend of USD 151 cents in September 2019.

Rio at the LME Week- Big may not necessarily be beautiful.

Rio at the LME week reiterated that the DNA of the mining industry to remain in the low-cost development. The CEO of the company suggested that volume growth for the sake of it and mega M&A do not equal value creation, and discipline in the mining investment is of paramount importance as big may not necessarily be beautiful.

Rio believes that the partnership and sustainability would define success ahead in the mining industry and in future, the winners would be those who could provide answers to the questions below:

To Know the Impact of Local partnership on the Long-term sustainability, Do Read: How ESG Consideration Rings Bell In Assessing The Quality of A Mining Stock?

Rio has been working on the sustainability front by focusing on the climate change, and at the LME week the company cleared its view that , chasing volume or mega M&A would not serve the purpose of providing superior returns to the shareholders- a lesson much learned from the impairment of $250 billion in the mining industry from 2000 to 2010 by the top forty companies.