The oil demand has taken a considerable hit in the wake of COVID-19 outbreak, which as per the estimation from the United States Energy Information Administration is down by 30 million barrels per day as compared to the pre-crisis level.

To Know More, Do Read: Why US-Backed OPEC+ Production Cut Is a Failed Stimulus in the Status Quo?

While the demand for oil has dried up, the global supply chain is relatively very strong; however, a record production cut agreement inked between the oil kingpin Saudi and Russia to slash-out 9.7 million barrels per day would take effect from 1 May 2020, which coupled with the falling oil production across the United States could contribute towards bringing a balance to the demand and supply dynamics ahead.

Many industry experts anticipate that even a production cut of 9.7 million barrels per day would not suffice to restore the formal glory of the black gold, which has gone dirt cheap in the recent days, even falling to trade below 0, where oil producers were ready to pay the buyers to buy some oil.

The plunge in oil prices and lower demand is causing an array of problems for many refiners across the continent and the globe.

Post taking considerable steps to operate processing units at reduced rates in order to balance refinery production with lower demand for fuel; the Company finally decided to temporarily suspend the activities at the Residual Catalytic Cracking Unit of the Geelong refinery, which as per the Company, is further required to curb the surplus production and smooth continuation of operations in these hard times and environment of weak oil demand.

VEA anticipates that the refining intake would fall by ~ 2.5 million barrels per month post the temporary suspension of the catalytic cracking unit; however, VEA suggests that post taking into account the cost efficiencies that would flow from not operating the units, it believes that there would be no incremental financial impact stemming from this action.

Viva just stands here as an example of many refiners curtailing the production in the wake of global fall in oil demand and the supply glut, and it could be seen on many fronts that how global refineries are limiting the production, leading to a further decline in global oil trades.

The decline in the export of petroleum product is leading to an overall decline in net imports and exports. 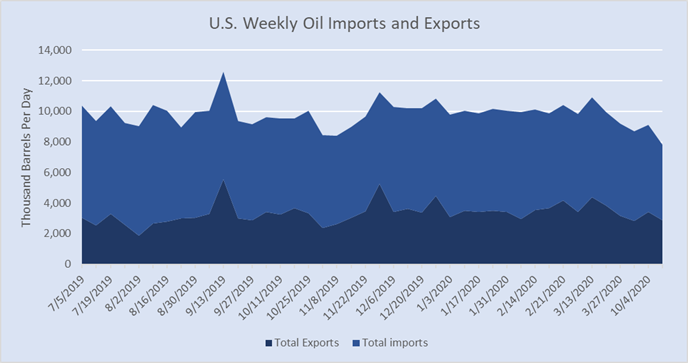 Post reaching a record production stage of 13.0 million barrels per day in October 2019, the United States had been upholding the run rate around the same level until now; however, now the domestic oil production in the United States is declining to the pre supply boom nominal level of 12.0 million barrels per day, seen at the beginning of the year 2019.

However, while the weekly crude oil production across the United States is declining, majorly for April, the overall global oil production yet remains high with no major change in the production from the oil kingpin- Saudi and OPEC. 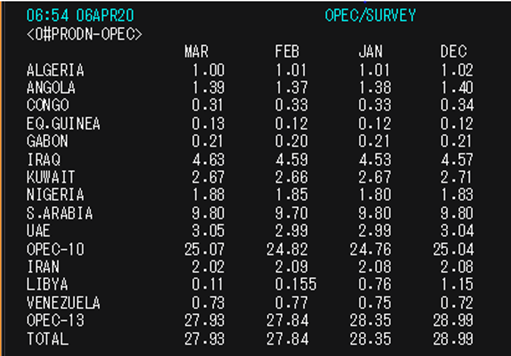 The oil production across OPEC till March 2020, remained largely unchanged; however, the scenario is anticipated by many subject matter experts to change over the coming period, especially post the record production cut of 9.7 million barrels per day, effective from 1 May 2020.

To Know More, Do Read: Oil Crisis: Should you Buy or Sell Some Oil Stocks?

While the difficulties for oil refineries and oil-related companies such as oil producers, explorers, is evident, many ASX-listed oil players have adopted significant measures to bring down the cost, and many claim to be able to sustain the low oil price environment for quite some time in the market.

The low oil price could be troublesome for oil producer over a long period; however, some of the ASX-listed stocks are yet reporting positive revenues for some business segments for the March 2020 quarter in the wake of decent demand for gas across Western Australia due to the east coast gas crisis.

To Know More, Do Read: Is LNG Sector Primed Against Oil Bloodbath? Santos LNG Sales Surges By 15.62 Per cent in 1QFY20

In a nutshell, the falling oil demand is prompting the global oil refineries to pull back production, and in the status quo, Viva Energy decided to temporarily shut its cracking unit to bring the production in line with the demand.

While the refineries are majorly scaling back, the overall crude trades across the United States, which is a significant consumer of oil, is falling and the nation is also reducing its domestic oil production, which coupled with an upcoming production cut by OPEC+ of 9.7 million barrels per day could help in bringing oil demand and supply balance.

On the demand counter, the consumption across the net crude imports such as India, China, Australia, would largely determine the faith of oil ahead, while supply seems poised to decline due to the scale back of global refineries and oil producers.

To know how demand for oil could take a shape ahead, do read: How Prudent is the Bet on Iron Ore Miners Over China’s Recovery? – BHP, Rio, and FMG