The major reason behind this decline can be attributed to macro-economic concerns, especially the trade war between US-China, leading to a decline in the global growth rate. Three Blue-chip Australian stocks with recent updates are BHP Group Limited (ASX: BHP), South32 Limited (ASX: S32) and Rio Tinto Limited (ASX: RIO).

BHP Group Limited is involved in the exploration, development and production of oil and gas; mining of copper, silver, zinc, molybdenum, uranium and gold; mining of iron ore; and mining of metallurgical coal and energy coal.

Recently the company published its 2019 Annual General Meeting, and the chairman highlighted that last year, Total Recordable Injury Frequency rose slightly to 4.7 per million hours worked, however they have reduced the rate of events with the potential to cause a fatality by 18%, which indicates future safety performance.

Under its portfolio, through a series of well-timed divestments and the demerger of South32, they have simplified their portfolio to five core commodities in 13 assets with the majority of its earnings generated in low-risk OECD countries. These assets are high quality products with low cost and have strong potential to deliver value to shareholders in the short, medium and long term.

Their capital discipline has made significant progress on strengthening their capital allocation framework. Capex guidance for the financial years 2020 and 2021 remain below US$8 Bn. They finished the year with net debt of US$9.2 Bn, which sits comfortably at the low end of their targeted range.

Last year in October, BHP generated net proceeds of US$10.4 Bn following the sale of their Onshore Petroleum assets, which they distributed in their shareholders through a combination of an off-market buy-back in December 2018 and special dividend in January 2019. With the approval of the Ruby oil and gas development in iron ore, copper, oil and potash.

Their financial performance for 2019 was strong, with higher prices and solid underlying performance contributed to EBITDA of US$23 Bn at a margin of 53% and strong operating cash flows. Across their major assets over the past five years, company’s volumes were up by 10% and unit costs down by ~20%.

BHP Group’s petroleum production for the period stood at 29 MMboe, a decrease of 1% than previous quarter. This was due to the impact of tropical storm barry in the Gulf of Mexico and planned maintenance at North West Shelf, partially offset by higher seasonal demand and less maintenance activity at Bass Strait.

Copper production for the period stood at 430 kt, a decrease of 3% than previous quarter. This was due to record concentrator throughput at Escondida offset by planned maintenance related to the refinery crane replacement at Olympic Dam.

Iron Ore production for the period decreased by 3% than previous quarter to 61 Mt. This was due to volumes at Western Australia Iron Ore (WAIO) lower due to the significant planned maintenance at Port Hedland.

Metallurgical coal for the period decreased by 21% than previous quarter to 9 Mt. This was due to lower volumes because of planned wash plant maintenance activities. Energy coal for the period was reported at 6 Mt, a decrease of 24% than previous quarter. This was due to higher strip ratios impacting volumes, adverse weather at Cerrejón and change in strategy to focus on high quality products at New South Wales Energy Coal.

Nickel production for the period stood at 22 kt, a decrease of 25% than previous quarter. This was due to impact of planned maintenance and transition to new ore bodies.

Recently the company published its September’19 Quarter report where it highlighted that its net cash increased by US$163 Mn to US$527 Mn. It achieved a record production at Brazil Alumina, and increased production at Illawarra Metallurgical Coal by 30%. It maintained higher rates of manganese ore production at its low-cost, flexible operations and commenced exploration drilling in the Southern Areas target at GEMCO following the receipt of approvals. It has invested US$17 Mn in exploration at its early stage greenfield projects and existing operations, at Hermosa.

The company is progressing well over acquisition offer for its South Africa Energy Coal business from Seriti Resources.

The Group’s statutory profit after tax decreased by 71% to US$389 Mn, following the recognition of impairment charges totalling US$504 Mn in relation to its South Africa Energy Coal Operation. Underlying earnings decreased by 25% to US$992 Mn, mainly due to increase in group production volumes by 3% and cost reduction initiatives across labour, material usage and energy, offset by lower aluminium and thermal coal prices.

The basic underlying earnings per share for the period decreased by 23% to US 19.7 cents per share. The company finished the year with a net cash balance of US$504 Mn. Its strong financial position allowed it to return US$762 Mn to its shareholders, which included payment of a US$256 Mn fully franked interim dividend and declaration of US$140 Mn fully franked final dividend.

Moreover, as part of ongoing capital management program, the company dispensed further US$366 Mn to its shareholders.

S32’s underlying EBITDA declined by US$319 Mn to US$2.2 Bn. Despite higher volumes, lower aluminium and thermal coal prices offset stronger prices for alumina, contributing to a US$275 Mn reduction in revenue. The underlying EBIT for the period decreased by US$334 Mn to US$1.4 Bn, as depreciation and amortization increased by a modest US$15 Mn with the higher production volumes.

The underlying earnings for the period declined by US$335 Mn to US$992 Mn. 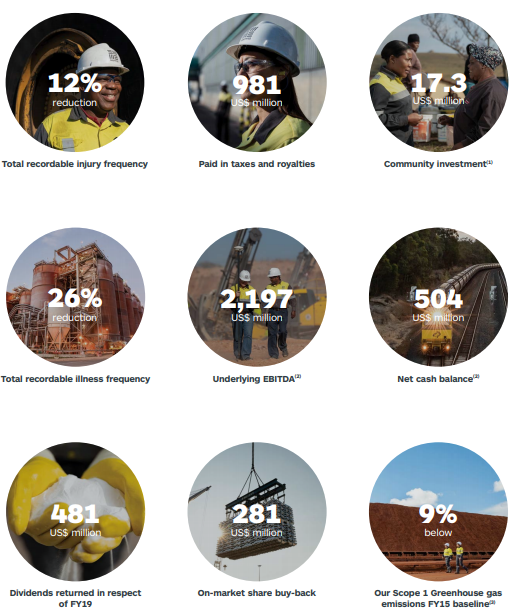 Recently, the company intimated that it will conduct a strategic review of its interest in New Zealand’s Aluminium Smelter at Tiwai point, to determine the operation’s ongoing viability and competitive position. New Zealand’s Aluminium Smelter is a JV between Sumitomo Chemical Company Limited and Rio Tinto with stakes of 20.64% and 79.36%, respectively.

The company expects a challenging outlook for short to medium term due to current market conditions and high energy costs. It intends to hold discussions with the government of New Zealand and energy providers to explore options and identify economically viable solutions to find a pathway to profitability for the asset. The strategic review is expected to consider all options, including curtailment and closure and is expected to complete by the first quarter in 2020.

Bauxite production and shipments to third parties for the period increased by 9% and 23%, respectively. Aluminium production for the period decreased by 3% to 789 kt, as compared to previous corresponding period. This was primarily due to shut down at one of the three pot-lines at ISAL in Iceland.