Consumer staple stocks are non-cyclical in nature, representing products and services that are essential for consumers regardless of the economic situation. Food, beverages, household goods, feminine hygiene products etc fall under the category of consumer staples. Generally, these are termed as necessary goods, and people are unable to cut out on the usage of these products from their budgets.

Infant Formula includes food items that are suitable for babies and infant less than twelve months of age. Specific formulations are needed to meet the various nutritious requirements of infants.

Solid demand for nutrient added and organic food items has propelled the Baby Food Manufacturing industry’s performance in the last five years period. Major players in this industry have successfully captured the rising need for infant products in both domestic as well as international markets. The industry revenue is anticipated to grow at an annualised rate of 3.7 per cent across the five years.

In this article, we are discussing, Bubs Australia Limited, which is into providing baby food and dairy products including infant formula, also called as baby formula, which is an alternative to breast milk for infants until 12 months of age.

Bubs Australia Limited was founded by Kristy Carr in 2006 and is the largest producer of goat milk products. The company’s products include baby products such as Organic Oats, Organic Apple Porridge, rusks, purees and cereals. 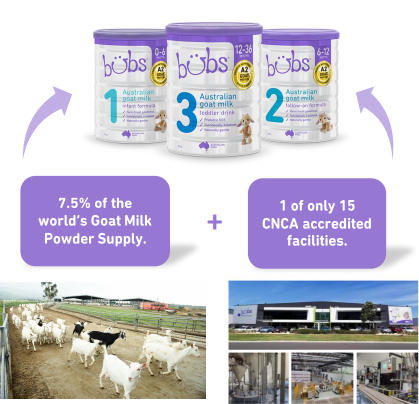 On 5 December 2019, BUB notified the market that its shares were placed in trading halt on ASX at its request, until the beginning of normal trading on 9 December 2019, pending a release of an announcement.

Relocation of Corporate Headquarters to Victoria

On 26 November 2019, BUB announced that it was relocating its corporate headquarters to its Australia Deloraine Dairy manufacturing facility in Dandenong South, Victoria. The official opening ceremony and ribbon cutting will be held soon in the presence of The Hon. Gabrielle Williams MP, State Member for Dandenong, and Mr Danny Pearson MP, Parliamentary Secretary to the Premier. The company’s new corporate headquarter is located near the Goat Dairy Farms and Supply Chain Partners.

For providing service to Bibo Mart and other Mother and Baby store chain, BUB signed an agreement with Viet Nam TVV Service and Trading Company (TVV).

TTV is one of the largest distributors of infant nutritional industry in Vietnam with Approximately 20,000 retail outlets.

The company’s goat milk infant formula and organic baby food products would be marketed and distributed by TTV through its network in Vietnam.

The company anticipates that the product will be on the Bibo Mart and other Vietnamese stores from December 2019.

The company is expected to generate revenue of $1.5 million from the initial distribution agreement in Vietnam. The time frame for the agreement is two years and may be terminated if BUB does not meet the minimum sales requirement.

On 6 November 2019, BUB announced a strategic agreement with Alibaba CIP to capitalise on the growth of China’s RMB10bn or $2Bn goat dairy market.

Under the Agreement, the company and key channel partner, Alibaba CIP expect to ship adult goat dairy products, including CapriLac® and Deloraine® brand portfolios, worth RMB 50m ($10m) in one year.

BUB will also be conducting an official signing ceremony at CIIE in Shanghai to formalise a Strategic Cooperation Memorandum of Understanding (MOU) with CCIC Australia.

On 31 October 2019, the company declared the Q1 FY20 period ended 30 September 2019, a few highlights of the announcement are as follows: