Lithium Stocks Sparkling; Is the lithium Downfall Coming To An End?

Lithium prices are sustaining in the international market post a massive downfall, which is now turning investors eye towards the lithium stocks across the globe. Lithium stocks are under scrutiny by the global market participants over the much-anticipated rush for lithium amid forecasted galloping of the electric vehicle industry.

Lithium on the London Metal Exchange

London Metal Exchange is a prominent exchange for metals with its ring sessions particularly famous among the global metal industry participants. The exchange took the initiative to standardise the lithium prices across the globe and provide the market participants with a reference price as spot prices across different geographies vary substantially.

It’s been a month, and the lithium-based chemicals have not shown any further downfall, which is now restoring confidence among the white gold-enthusiasts over the lithium stocks.

To Know More, Do read: How Are Australian Lithium Miners Taking Roots To Leap on the Stabilised Lithium Chemical Prices?

Australia and the White Gold

Australia hosts a wide resource and reserves of lithium and bags the number one spot in the lithium supply industry. Previously, over the ongoing trade war, the lithium chemical prices were under pressure in China, which is among the top Australian spodumene consumer.

The Australian lithium companies are developing their projects to ensure the dominancy in the lithium industry as they face challenges from Chile.

To Know How? Do Read: Chile And SQM Leap To Regain The Market Share Posses Headwinds For Australian Lithium Miners Ahead

Want to Know Why? Do Read: Why Are Market Players Clinching to the EV and Lithium Forecast?

Altura flagged a record production of 45,484 wet metric tonnes of lithium concentrate at its’ wholly-owned Pilgangoora lithium mine for the quarter ended 30 September 2019. The production witnessed the growth of 7.3 per cent against the June 2019 quarter amid increased ore production, higher grade and improved plant throughputs.

The mining and processing quantities for the September 2019 quarter against same corresponding quarter in 2018 and against the previous quarters stood as below:

The above information would require re-processing and /or blending to be incorporated in the saleable product (Source: Company’s Report)

The spodumene concentrate production surged in the September to stand at 17,887 wet metric tonnes after witnessing a decline for three consecutive months. 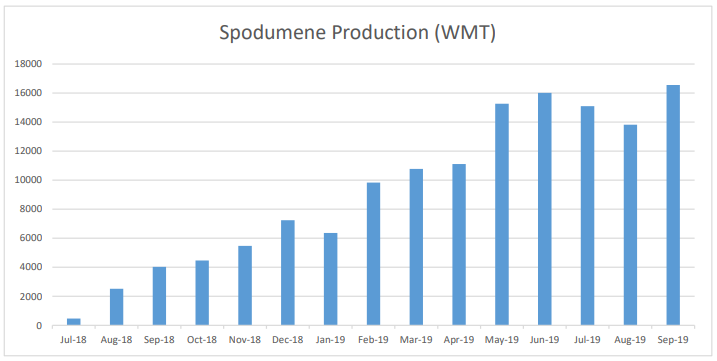 The current run-of-mine and crushed ore stocks stood at 540,513 wet metric tonnes (as on 30 September 2019), out of which 300,140 wet metric tonnes stood above the grade of 1.20 per cent lithium oxide, which in turn, would provide sufficient stock to blend and feed the process plant.

The Qube Bulk hauled 44,407 wet metric tonnes to the storage facility from the mine site during the September 2019 quarter, which underpinned the growth of 12 per cent against the previous quarter.

CATL holds large agreements with leading global car manufacturers such as Toyota, BMW, Volkswagen and Honda, which makes the interest of the company in Pilbara very intriguing among investors.

Pilbara received the Tranche 1 payment of $20.0 million from CATL post the approval from the People’s Republic in China, and now the company seeks the shareholders’ approval to secure another payment of $35.0 million.

Pilbara, under its Share Purchase Plan (or SPP), had received applications totalling approximately $27.3 million, while the pan of the company was to raise $20 million.

Under the purchase plan, the issue price was decided to be at $0.30 a piece, which remains higher than the last traded price of $0.285 on the Australian Securities Exchange.

To conclude, the Australian lithium suppliers are now taking a respite over the stabilised lithium prices in the market, and the miners are again ramping up the production or either securing strategic position to leap with the anticipated rush for the white gold.

While Altura reaches record production and operational milestones, Pilbara seized strategic opportunities, and not just these two; many other ASX-listed lithium miners are again rising to position themselves in the lithium supply chain in different manners.

Investors should look and analyse the further development among the Australian lithium miners to gauge the mood of the lithium industry and to reckon if the lithium downfall is coming to an end?