Economists have warned that the Australian economy will be exposed to the global recession due to the US-China trade battle. According to prevailing expectations in the market, the agriculture sector will be most affected by the deal between Beijing and the United States over agricultural products.

Let us have a look at some factors that might pose a threat to the Australian economy:

At the G-20 summit meeting in Osaka, the Australian trade minister, Mr Simon Birmingham assured that the Australian government will keep a very close watch on the US-China truce in order to prevent a fall in agricultural exports.

State of the Australian Labour Market: The unemployment level in Australia increased to 5.2 per cent in April this year, indicated the data announced by ABS. It was the highest such level reached in the previous eight months to April.

However, the jobless rate remained above 5 per cent despite a surge in hiring. The data indicated that there is a need to generate more jobs in the Australian economy in order to reach the full employment level.

The figures released by the ABS on 4th July 2019 pertaining to the job vacancies in Australia demonstrated a fall in the job vacancies for the first time in three years. The job vacancies plummeted 1.1 per cent in the three months to May 2019, signalling that the economy is losing momentum. The total job vacancies dropped to 241,500 and vacancies in the private sector slipped by 1.6 per cent to 219,400 in the March-May quarter. The job market data was in line with the other labour market indicators like the unemployment rate. 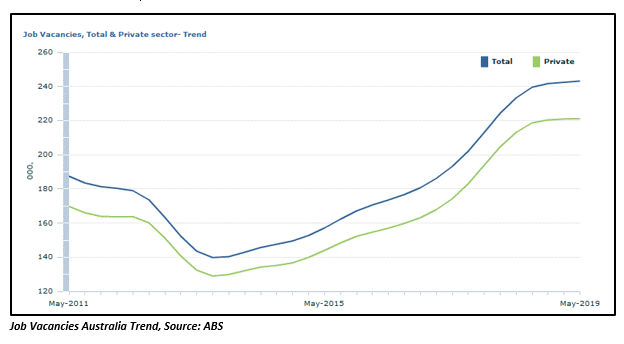 Brexit Effect on Australia: Britainâs decision to leave the European Union is expected to affect the economies across the world in some way or the other. The Australian companies that have strong connections with the European funds management and the UK capital markets might suffer from the Britainâs move. As these companies generate a substantial amount of earnings from Europe and the UK, they are more vulnerable to the Brexit decision.

The overall economic impact of the Brexit would be negative in both the short and medium term, stated Australiaâs regulatory body, the Council of Financial Regulators (CFR) in a report. However, the regulator mentioned that the effect of Brexit on the Australian economy is likely to be small, as Australia has proved itself to be resilient during the periods of financial market volatility. Australia is well positioned to manage the financial market and economic response to Brexit, said the report.

Weaker Economic Growth: In June this year, the Australian Bureau of Statistics (ABS) released data on Australian National Accounts: National Income, Expenditure and Product for the March Quarter 2019. The data showed that the growth across the Australian economy fell to its weakest level observed since the global financial crisis. The GDP growth slowed to 1.8 per cent (Mar Qtr 2018 to Mar Qtr 2019). During March Quarter 2019, the Australian economy grew by 0.3 per cent in trend terms and 0.4 per cent in seasonally adjusted terms relative to the December 2018 Quarter.

Recently, IMF in its report suggested that Australiaâs economic growth will fall from 2.8 per cent last year to 2.1 per cent in 2019 amid the worsening trade conflicts between the US and China.

Australian Housing Market: The Australian housing market scenario has been a key topic of discussion for the market experts this year. This is because the economy has been experiencing a housing market slump with a continuous fall in the housing prices in the last few months. However, the recent data on the property market prices suggest that the Australian is heading towards the recovery in the housing sector.

A recently released âHedonic Home Value Indexâ by a property consultant CoreLogic demonstrated that the housing prices recovered slightly in Sydney (0.1 per cent rise) and Melbourne (0.2 per cent rise) in June 2019. Although, the ABS data for the March Quarter 2019 indicated a fall in housing prices across all the capital cities of Australia.

This recovery is in line with the expectations of the economists that the property prices might recover in the second half of the year.

Interest Rate Scenario: The Reserve Bank of Australia has recently reduced the interest rate to a historic low value of 1 per cent. The decision was taken by the central bank to drive down the unemployment rate and lift wages. Recently in June, the bank slashed the interest rate from 1.5 per cent to 1.25 per cent amid weak unemployment rate and disappointing inflation figures.

The RBAâs decision to cut the interest rate did not come as a surprise as economics were already expecting further rate cuts. The National Bank of Australia (ASX: NAB) has also predicted another rate cut in November 2019.

Signs of Recovery: However, some signs of recovery can be seen in the Australian economy as the retail turnover figures released by the ABS have improved by 0.1 per cent in May 2019 in seasonally adjusted terms. The retail turnover has recovered from a fall of 0.1 per cent witnessed in April 2019. Also, the dwelling approval slump eased in May 2019 with dwelling approvals rising by 0.7 per cent in seasonally adjusted terms.

Another sign of recovery was seen in the household wealth data that was slightly up (0.2 per cent) in the March quarter 2019 to $10,242.6 billion. This was driven by the real holding gains on financial assets (inflation adjusted), offset by holding losses on residential real estate.

The Australian equity market has performed decently in 2019 despite several challenges. Although, the Australian economy is poised to several risks currently, but the past performance of the economy makes the belief stronger that it will sweep through the difficult phase.