Share buy-backs or share repurchase is a corporate action within the listed companies, which allows a company to buy its shares that are actively traded in the market. Companies use existing cash to fund these operations, and it provides a route to return the value to shareholders.

On-market buy-back – Under this type, the companies conduct buying of shares in the openly traded market with the help of market participants. It enables a company to execute the trades whenever an attractive opportunity arrives.

Off-market buy-back – In this type, the companies conduct buying of its securities at a pre-defined offer price declared by the company. Companies provide the number of shares to be purchased, important dates to apply, and sometimes eligibility.

Platinum Asset Management provides investors with exposure to international equities. Founded in 1994, the company remains focused on the global equity domain. The stock of the company is designated under the Financials Sector, and it is a component of S&P/ASX 200, S&P/ASX All Australian 200, S&P/ASX 200 Financials (Sector), and a few more indices.

Recently, on 17 September 2019, the company announced that it would extend the on-market share buy-back for up to 10 per cent of its issued share capital for a period of up to 12 months. PTM has intended to extend the program as a part of its capital management policy.

The company would be able to buy-back shares, which, according to PTM, are believed to be trading at a significant discount against the underlying value. Reportedly, the company has not finalised the price and time to conduct the program. However, the Board of the company intends to act opportunistically, given the volatility in the markets.

Earlier this month, the company had disclosed assets under management for the month of August 2019, which were at $24,401.35 million compared to $25,150.40 million in July. During August, the company had witnessed net outflows of approx. $407 million, which included an outflow of approx. $365 million from the Platinum Trust Funds.

Platinum has been focused on the international equity domain, and it has funds offering exposure to specific geographies. Under its Global Strategy, the company intends to reap investment returns from a broad range of industries and sectors across the globe. Global strategy allows the investors to access exposure into a diversified portfolio. In this strategy, the company operates six funds.

The asset manager operates Asia ex-Japan Strategy, which invests in assets from Asia ex-Japan region. It has a dedicated team of Asia specialists to provide insights and valuable contribution from people with rich experience. In this strategy, the company operates three funds.

In its Japan Strategy, the company had been operating a fund since 1998. As of 30 April 2019, the fund had a 14.3% per annum return since inception. The strategy focuses on fundamentally driven selection for stocks, and invests in Korean companies as well.

Europe Strategy of the asset manager focuses on companies across sectors from consumer brands to pharmaceuticals. PTM believes that the region offers a mix of industrialised Western Economies and Eastern Europe’s emerging markets.

Reportedly, FY2019 was a challenging year for the asset manager, and investment returns in the majority of its fund were behind the broader market returns for twelve months to year-end on 30 June 2019.

As a result of subdued performance, the fund had attracted relatively lesser fund inflows and lower performance fee, which resulted in declining revenues, and consequently declining profits and EPS. 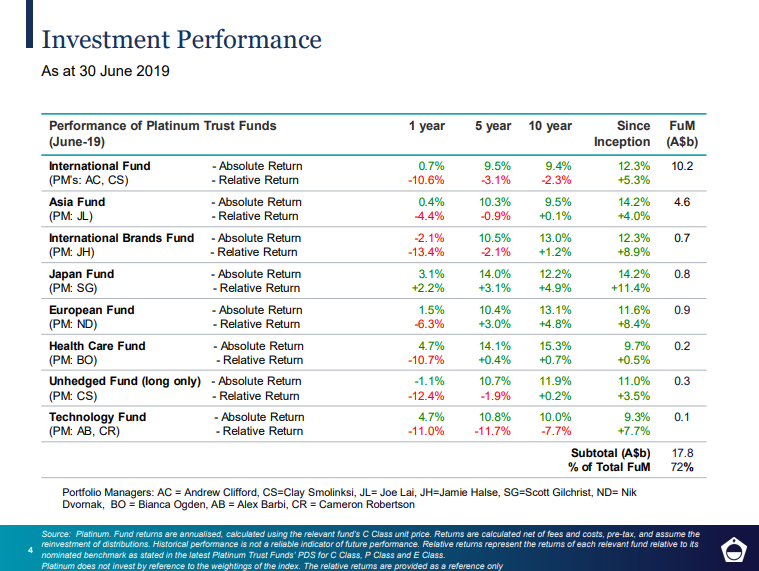 Predominantly, the declining revenue was attributed to investment performance fees, which fell by $22 million along with $22 million fall in the gains on the company’s seed investments.