The company for FY2019 ended 30 June 2019 reported a 137% rise in profit after tax to $13.6 million and a 201% increase in profit before tax to $16.8 million, including $1.8 million from net gain on foreign currency, compared to the corresponding period last year. Nanosonics also delivered a 39% growth in sale of goods and services to $84.3 million, 28% increase in capital revenue to $32.8 million and 47% surge in revenue associated with consumables and service to $51.5 million. 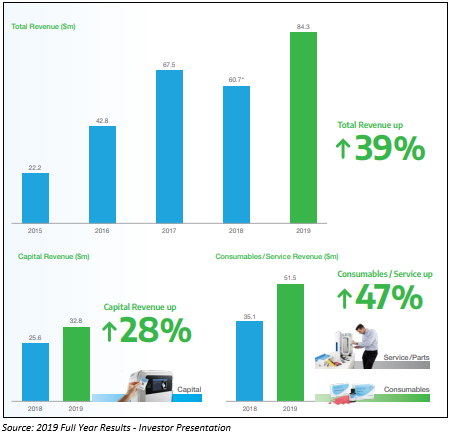 During the 12-month period, there was an 18% growth in the trophon installed base to 20,930 units. Geographically, during FY2019, there was a 41% rise in sales in North America to $76.5 million and a 27% growth in sales in Europe/Middle East to $3.8 million, while Asia-Pacific’s sales went up by 21% to $4 million. The company’s free cash flow for FY2019 fell to $2.6 million compared with $6.2 million in prior corresponding period, on the back of rise in inventory of $5.1 million and increase in trade and other receivables of $11.1 million.

Pro Medicus Limited (ASX: PME) is into the distribution of healthcare imaging products across Australia, Europe and North America. The company in order to improve the liquidity of its stocks had earlier asked its founders to consider selling their stocks (up to 3 million shares each); however, they had sold 1 million shares each. According to a company announcement on 6 September 2019, further 1 million shares each have been sold by the founders.

For the financial year ended 30 June 2019, the company reported

Healius Limited (ASX: HLS), formerly known as Primary Health Care Limited, offers diagnostic imaging services and pathology services. For the fiscal 2020, the company expects underlying NPAT to be more than FY2019. The company is undertaking strategic initiatives and redesigning of organisation to improve its business.

The company witnessed overall positive EBIT in all the three divisions, which included double digit growth of Imaging and Medical Centres and a 46% rise in the Pathology segment. Pathology segment had rebounded in the second half of FY2019, as it had faced challenging environment in the first half of FY2019. Overall during FY2019, there has been a 4.5% increase in EBIT to $167.3 million.

Moreover, HLS’ four key projects are transformational in nature. Moreover, iCAR is anticipated to cease after FY2020, Leapfrog opex is expected to significantly decline after FY2020 and corporate renewal is likely to change after redesigning of the current organisation.

PolyNovo Limited (ASX: PNV) is into the development and manufacturing of products that use NovoSorb biodegradable polymer technology. Recently, the company announced the appointment of Mr Ed Graubart as Senior Vice President of PolyNovo North America LLC. He would support the company in its sales and marketing operations in the US business. Meanwhile, as per September 2019 quarterly rebalance of the S&P/ASX Indices, the company has been added to S&P/ASX 200 Index, which was effective from 23 September 2019.

During FY2020, the company intends to significantly expand the sales of BTM in the United States, Australia and New Zealand, expand the sale territories, introduce new products in pipeline for breast and hernia and boost the manufacturing capacity commission hernia production, in addition to filing Hernia US FDA 510(K), achieving US DoD sales and boosting EU/UK/Ireland sales with CE Mark.

Moreover, the final publication of results of CE Burn trial is due to be released by the end of CY2019. BARDA funded the pivotal burn trial, which is anticipated to start after the US FDA approves its protocol, which is expected by October/November 2019. 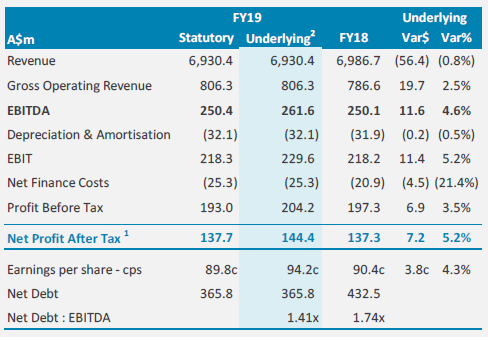