Australia’s largest vertically integrated nut and health food company, Select Harvests Limited (ASX: SHV) has delivered strong operating results in the first half of FY19, on the back of a very good crop. Overall, the company has reported a net profit after tax of $20.0 million, up 96.1% on the previous corresponding period. Further, the company reported EBITDA of $38.5 million, which was 48.6% higher than pcp.

Following the release of the results, the share price of the company increased by 9.798% during the day’s trade. The company’s board has declared a fully franked interim dividend of 12 cents per ordinary share. The Record date for the dividend is 14th June 2019, and the Payment date is 5th July 2019. 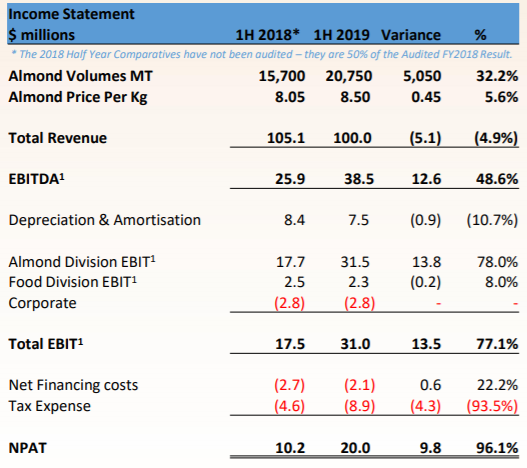 In the company’s almond division, at the end of the half-year period, the harvest activity was approximately 50% complete, therefore half of the fair value of the 2019 crop has been recognised in the company’s income statement. During the period, the macro demand for almonds remained strong in both retail and industrial markets. The company has now commenced shipments into its traditional markets, such as inshell into India and kernel product to European customers, which will lead to early cash flow benefits.

During the period, full horticultural program has led to significant yield increases. The water costs for the 2019 crop were 39% higher than 2018, driven by the increased temporary water prices on the spot market. Overall, the Food Division performed in line with the expectations.

In SHV’s Food Division, the company reported EBIT of $2.3 million. The company is currently working and investing with its partners to establish and grow a sustainable position in this increasing market.

Due to the current China tariffs imposed on US products, the industrial food sector has witnessed a significant uplift in demand. As a consequence, the company is able to achieve greater volumes and margins. The company’s focus on value-addition is enabling the company to provide additional quality-assured product for this market.

In the second half of FY19, the company is expecting to deliver similarly favourable results.