After receiving shareholders’ approval at the recent Annual General Meeting (AGM), Krakatoa Resources Limited (ASX: KTA) has now completed the acquisition of the Belgravia Project which is located in the central part of the Molong Volcanic Belt (MVB) 40Km North of Newcrest’s Cadia, Australia’s largest gold mine.

The acquisition was announced on 26 September 2019, when KTA entered a binding term sheet with Locksley Holdings Pty Ltd to acquire a 100% interest in Exploration licence 8153, comprising the Belgravia Project which is considered prospective for four deposit types:

Since then, the Company has made significant progress in the exploration of the project and had reported multiple important findings which significantly enhances the prospectivity of Belgravia. In the process, the Company has also significantly increased its shareholders’ wealth, as KTA’s stock has risen by around 80% in the last three months.

To acquire the Belgravia Project, KTA has paid $300,000 to Locksley Holdings Pty Ltd, issued 10,000,000 fully paid ordinary shares and has executed a royalty deed for the 1% Net Smelter Return. Additionally, the Company has also issued 10,000,000 listed options exercisable at $0.05 on or before 31 July 2021 to the facilitator of the acquisition.

The field due diligence conducted at the project has already confirmed the prospective nature of the Belgravia Project and the 6 initial targets and has reported significant findings, which include: 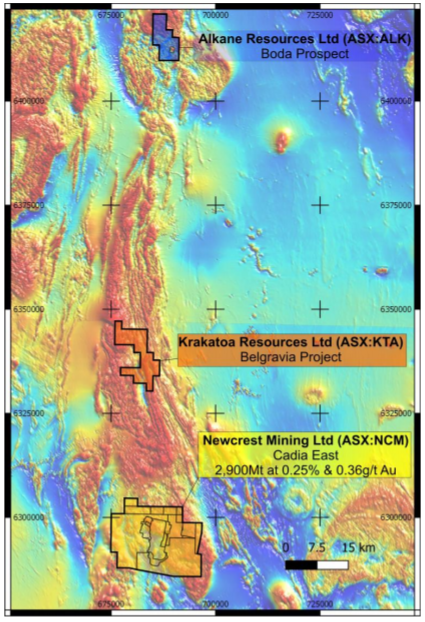 KTA’s current exploration activities at the Bell Valley target, one of 6 initial targets on the Belgravia Project, has already identified two major porphyry intrusive complexes: the Larras Lake Igneous Complex (LLIC) and the Copper Hill Igneous Complex (CHIC). Both these complexes provide KTA with a highly prospective area of over 15km2 for the discovery of porphyry clusters.

Krakatoa believes that the metal tenor and distribution, and that of the alteration minerals, support the theory that Newcrest drilled the periphery of a larger mineralised system that potentially lies at depth and direction consistent with the Company’s Belgravia Project. A drone magnetics survey is also currently underway at the Bell Valley Target.

While KTA is busy focusing on its Belgravia Project, it continues to explore opportunities to further expand its landholding within the Lachlan Fold Bel and has acquired, the Turon Project, via direct licence application (ELA5882), subject to grant. The Turon Project contains multiple anomalies demanding an investigation.