Kaiser Reef Limited is a unique junior gold exploration company holding an option to acquire the historic Stuart Town gold mining district in New South Wales. This area hosts a prolific group of historic gold mines that have barely been explored in modern times. Stuart Town is located in between the Cadia gold mine, Australia’s largest gold mine and the new Boda drill discovery made by Alkane. This places Kaiser Reef on the Lachlan Fold Belt and in some of the hottest exploration grounds in Australia.

Kaiser Reef expects to raise $4.5 million through an initial public offering of 22,500,000 shares at an issue price of $0.20 per share closing on February 7, 2020. Probable ASX ticker for the company after listing is KAU. The total issued shares will be approximately 33,500,000 shares on issue, making this one of the tightest listings on the ASX. This value flow through for tight company really enhances the upside. The company is being managed by a geologically focussed and experienced team who most recently listed the very successful Galena Mining Limited and which is currently moving into production. Galena stock ran so high that the company did a 1 for 5 share split shortly after listing.

Once the IPO and the acquisition closes, the company intends to explore its tenements for bulk tonnage gold by conducting direct drilling and geophysical surveys which would collect data to map for better understanding of the mineralisation.

The gold prices reached the record territory of A$2,350 an ounce post the Iranian retaliation on the US' Al Assad and Erbil airbases in Iraq. The record level triggers the miners to increase the supply and the explorers to accelerate the exploration and development of the mining project as the investors line up to buy gold as a hedge against the global uncertainties.

Geopolitical issues such as the US-China trade dispute, attacks on Saudi Arabia's oil facilities, the impeachment trial of US President, weaker global economic growth and others led the gold prices to increase almost throughout the year. The XAU (Philadelphia Gold and Silver Index Gold Spot US$ prices) started 2019 at the price of US$1,282 an ounce and currently stands at the US$1,555.47 an ounce, an increase of almost 21%. The increase in demand for gold requires higher supply from the miners, for which more and more capital inflow into the ramp-up of operational mines and the development of the new mines has started. 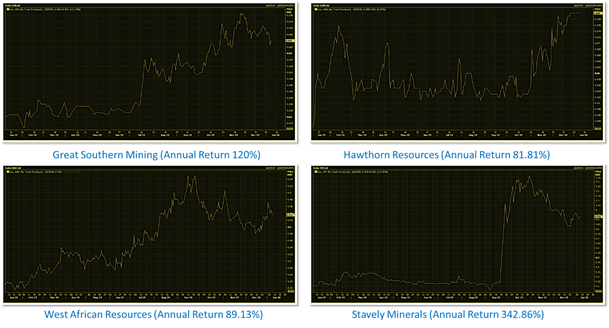 Mr Adrian Byass serves as the Non-Executive Chairman of Kaiser Reef Limited. Mr Byass has an extensive experience of more than two decades in the base, precious, speciality and bulk mining commodities. Mr Byass also serves as the director of Galena Mining Limited.

Mr Jonathan Downes Serves, as Executive Director of Kaiser, has 25+ years of experience in nickel, gold and base metals sector. Mr Downes also serves as the non-executive director of Galena Mining.

Mr Adrian Byass and Mr Jonathan Downes are both geologists and have an impressive track record of 6 IPOs with an average return of 15 times at the peak prices from the listing. Out of these 6 listings, 4 mining operations were brought onstream, one is under construction (Galena) and one is seeking financing.

Kaiser Reef Limited under the leadership of its remarkable management, would focus on the exploration and development of the Stuart Town gold project efficiently and under tight deadlines.

The Stuart Town gold project is located in a matured mining neighbourhood of New South Wales, Australia. The gold discovery in the region dates back to the year 1851, when Edward Hammond Hargraves in 1851 while travelling along the Macquarie River recorded that alluvial gold was found along the river. 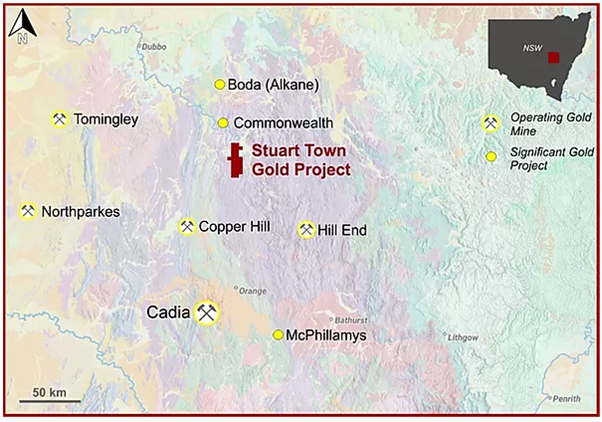 Over the past 150+ years, the region has experienced numerous gold mining operations, popularising the region for its large-scale intrusion related gold systems. The long history of mining in the area provides evidence of the historical workings and the possibility of newer resources.

The recorded gold production from the region is roughly 170,000 ounces which had been produced between 1875 and the 20th Century. Other companies of the likes such as Rio Tinto and Carpentaria Exploration Limited (a subsidiary of Mount Isa Mines Limited -MIM) have conducted various geological surveys and exploration programs in the region in the past. The project includes tenements of the exploration licence (EL 8491) and one exploration licence application (ELA 5854).

As per the historical workings, the geology type around the Stuart Town is perceived as of quartz reefs and as alluvial deposits. Gold mineralisation in the reefs, especially at depths greater than 30 metres are sulphide minerals mostly occurring as pyrite, arsenopyrite, chalcopyrite, and galena. The publicly available geophysical data suggests magnetic and gravity anomalies indicating the presence of gold mineralisation.

The grades in the past operations varied up to 428 grams a tonne, with an average gold grade in the range of 15 to 30 grams per tonne. The project area includes previously mined zones and newer prospective areas and extensions close to the Alkanes recent Boda discovery.

The Kaiser’s property lies between the Alkane North Molong Project and the mega gold Cadia mine operated by Newcrest. During initial stages, the Company intends to focus on the geophysical surveys including detailed, magnetic, gravity and Induced Polarisation (IP) techniques. The data points from the surveys would be beneficial in developing a better understanding of the mineralization and identifying further targets for the exploration programs. Additionally, extensive mine mapping and drill scheduling can be carried out followed by an initial drilling program, which would be carried out in the high-grade regions.

The exploration program would be followed by the pre-feasibility and feasibility studies to assess the feasibility of the project. Kaiser Reef intends to look out for further acquisitions of promising mineral assets.