Duxton Broadacre Farms Limited (ASX: DBF) updated its profitability outlook for the year ending 30 June 2019 (FY19) from the previous outlook announced in December 2018. DBF previously reported the expected profit before tax for FY19 to be in the range of breakeven to AUD$500,000, it excluded the impact of Boorala acquisition in the previous expectation.

But the announcement dated 22 May 2019 to the exchange read that the company expects to report a modest loss before tax for the year FY19.

This anticipation through DBF comes on the back of subdued agricultural commodity prices, escalated irrigation costs and commencement of Boorala operations. The board believes that the company’s operational performance has been praiseworthy despite intense drought conditions.

The drought in the Southern Australian region witnessed the driest Autumn in 116 years. It was reported that DBF expects its cashflow position to remain positive for the period ending 30 June 2019, as earlier announced on 3 May 2019.

DBF also released its ‘Monthly Update for April 2019’, providing investment and operational insights along with the Australian and Global commodity market scenario during the month.

The rollout of company’s irrigation development program is progressing in line with broader risk mitigation strategy which aims to increase water security, operational flexibility and visibility. Construction of the second storage facility at Walla Wallah that commenced during March is progressing well with installation of the distributor barrel successfully completed and supply pipe installation is underway. This bore has the capacity to yield up to 20ML/day.

Cotton cropping is expected to be finished by mid-May. As per the company’s information, DBF has started sowing wheat and barley and regular rainfall would ensure strong early development of these crops. Livestock sale continued during the month, and Angus cows would be sourced for herd replacement.

Domestic grain prices have declined since March. Positive rainfall outlook increases the chances of greater supply resulting a fall in prices. Therefore, if rainfall gets lower than expected or it is highly variable, market prices could rise to reflect anticipation of shortages in supply. 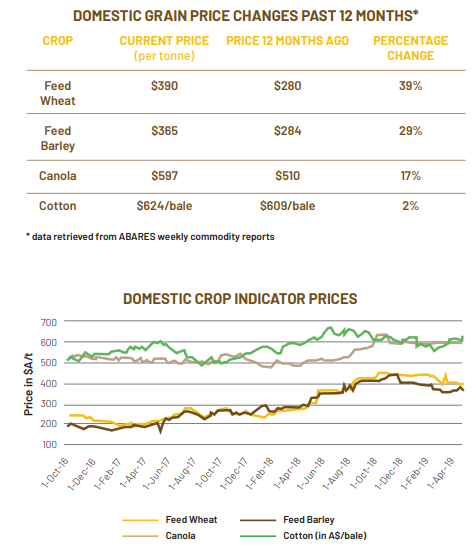 Cotton prices fluctuated by one to two cents internationally but finished slightly lower at 86.5 USc/lb. The supply outlook for cotton is expected to exceed 27 million tonnes, which could be the second largest pick in history. Global stock levels of cotton are expected to grow by 400,000 tonnes, as per the Cotlook forecast.

The International Grains Council (IGC) has maintained its forecast for Australia’s total grain production at 28.4 million tonnes for last season. Wool prices remain 6% above this time last year with upliftment in China demand. Lamb prices strengthened to A$ 7.13/kg in April, which breached the A$7/kg from last November.

Globally, dry conditions in Russia, Canada and the EU impacted the wheat crop. Maize crop was also impacted in Russia and South Africa by dry condition along with rice crop in Thailand. Furthermore, flooding has impacted soybean crop in Northern Argentina. The winter wheat crop is developing in favourable condition globally along with rice and soybean. However, rice and soybean received heavy rainfall in some parts of Argentina.

The 2018/19 grain season is projected to produce 2,121 million tonnes of grain, which is a two-year low. Wheat production is expected to be down by 29 million tonnes year-on-year and barely is set to have the smallest forecast in six years, reportedly.

During the month, DBF continued its share buyback program with the on-market acquisition of 8,500 shares, taking the total number of shares acquired under the buyback to 628,672.