Are you looking to invest in an IPO offering growth potential in the Copper and Zinc sector? Let us acquaint you with an ongoing offer by a rising mineral player, Tartana Resources Limited (Proposed ASX code: TNA).

Tartana Resources is a promising player in the copper and zinc space, seeking to raise capital while providing its shareholders the exposure to exciting projects based on copper and zinc â two commodities with attractive supply and demand fundamentals including the potential new demand from electric vehicles.

Tartana Resources was incorporated on 6 August 2007 as Riverside Energy Ltd. However, in September 2017, the company redesigned its focus to become a significant copper and zinc explorer and producer.

Following this, the company acquired the Tartana Copper-Zinc Project during the third quarter of 2017. Subsequently, the company also acquired Zeehan Zinc Slag Project in early 2018.

Currently, the company is advancing rapidly with the below project pipeline:

Previous explorers have suggested that the Tartana mineralisation is part of a larger copper porphyry system. As per SRK Consulting (Australasia) Pty Ltd, the mineralisation and alteration are consistent with the distal parts of a copper porphyry and could also be classified as a fault- and vein-hosted, intrusive-related mesothermal deposit that may be more distal than a typical porphyry-style deposit.

As per SRK, the mineralisation is strongly fault-controlled and is not constrained by the current drilling; hence, it could be part of a larger system.

The company believes that its Zeehan Zinc Slag Project, amidst the current high zinc price regime, has the potential to generate cash flows as well as provide an opportunity to later restore an old smelter site. The old Zeehan smelter site has two old slag heaps.

Tartana has completed recent drilling to provide supporting data for the estimation of an Indicated Resource of 469,000 tonnes at 13.3 % Zn, 1.7 % Pb, 53 g/t Ag and with potential indium credits. The company has been investigating a number of options for monetising this zinc, including direct sales and with processing by leaching or fuming.

The Mt Hess Copper/Gold Project and the Amber Creek Molybdenum/Tin/Tungsten project are the companyâs two smaller exploration projects in Queensland, that have identified mineralisation within prospective tenements.

The companyâs future modest exploration activities will be directed at determining whether there is scope to identify economic resources on these exploration tenements.

Whatâs in for Investors?

As per Tartanaâs Executive Chairman Mr. Stephen Bartrop, an investment in the company will provide investors with exposure to some exciting copper and zinc projects which the company believe have significant potential to deliver shareholder value.

What will Tartana do after IPO?

The funds raised from Tartanaâs IPO will be used to undertake drilling on the projects within the Tartana Copper and Zinc Project mining leases, in particular:

As per the prospectus, the funds raised from the Offer will be applied as follows: 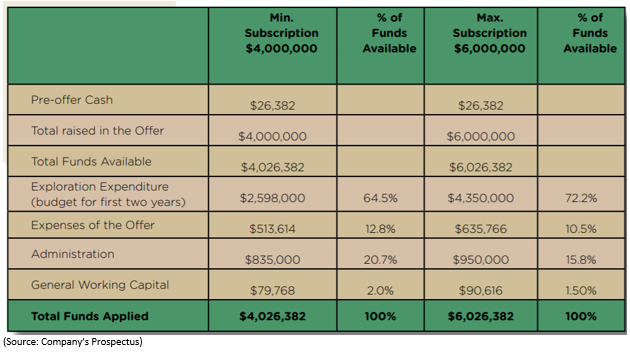 The exposure to some exciting copper and zinc projects is one major attractive aspect of Tartanaâs IPO. If everything goes well, this IPO could turn out to be a major step forward towards the companyâs mission of becoming a significant copper-zinc player.

To know more about the IPO offer click here.