3 Media And Entertainment Stocks In The Limelight

As per the media reports, the entertainment industry of Australia is growing at a phenomenal rate. The leading driver related to the growth of the industry is online video. Additionally, the increasing proportion of entertainment revenue has been driven primarily by smartphones.

In another update, the company communicated that it will release its results for the full year ended 30th June 2019 on 22nd August 2019. Additionally, SXL informed investors that Vinva Investment Management became an initial substantial holder in the company with the voting power of 5.05% effective on 26th July 2019.

Macquarie Investor Conference Presentation Takeaways: The company in Presentation stated that the national investment with Southern Cross Media Group Limited in the regional radio markets has increased 12% and 14%, respectively over the last two years. SXL has led the education and conversation with agencies and advertisers. The company witnessed 13% CAGR in National Regional Radio Advertising Revenues. In addition, over the span of the last five years, the company experienced a reduction in net debt amounting to $284 million or 48%. The debt reduction program has placed the company with a much improved balance sheet, creating flexibility to pursue its corporate strategy. 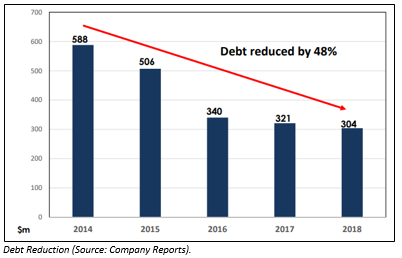 A communication services sector company, Nine Entertainment Co. Holdings Limited (ASX: NEC) is engaged in the program production and television broadcasting. Nine Entertainment Co. Holdings Limited was officially listed on ASX in 2013. Recently, the company via a release announced that National Australia Bank Limited and its associated entities ceased to be a substantial holder in the company from 22nd July 2019. Going forward, the company announced that it will be releasing results for the financial year 2019 on 22nd August 2019.

As per the release dated 1st July 2019, NEC has wrapped up the sale of Australian Community Media and Printing (or ACM) to a company, which is controlled by interests associated with Antony Catalano and Thorney Investment Group on 30th June 2019. The company received cash proceeds amounting to $105 million from the transaction.

The company anticipates pro forma group EBITDA on a continuing business basis amounting to be $420 million, which equates to the rise of at least 10% on the FY18 like-basis result of $385 million. The company further stated that it anticipates positive momentum at the group level in FY20. In terms of Stan, it expects continued strong subscriber growth and limited variability in the cost base. From Q4 FY19, the stan segment is anticipated to be positive in terms of EBITDA.

Seven West Media Limited (ASX: SWM) is engaged into free-to-air television broadcasting, newspaper and magazine publishing. The company was officially listed on Australian Stock Exchange in 1992. Recently, the company via a release updated the market that Commonwealth Bank of Australia and its related bodies corporate have ceased to become a substantial holder in the company from 2nd August 2019. In addition, Vinva Investment Management has been ceased to be a substantial holder in the company with effect from 1st July 2019.

Furthermore, the company witnessed softer Q2 in the metro TV ad market, but reported strong share growth. SWM reported an underlying EBIT of $147 million, reflecting a fall of 4%. The company delivered underlying net profit after tax (UNPAT) amounting to $91.8 million in 1H FY19. The net debt of the group declined below $590 million, which represents a fall of $121 million on a Y-o-Y basis. Seven West Media Limited has increased revenue share in FY19, including 42.5% share of BVOD market and a 41.3% share of the metro FTA market in April. The following picture provides a broader idea of consolidated profit and loss.

Seven West Media Limited anticipates underlying group earnings before interest and taxes (or EBIT) to be in the neighborhood of $210 million to $220 million for the year ending 30th June 2019 as compared to $235.6 million in the previous year. The net cost reduction for the group will come in at the upper end of the range at $30 million to $40 million. The company further stated that it continues to over-deliver on cost-savings, invest in strong growth areas and transform its business at pace. Moreover, 7Plus will be increasing revenues more than 40% and Seven Studios will be achieving robust EBIT growth for the financial year 2019. The company remain focused on decreasing its net debt by around $75 million and improving its balance sheet flexibility in the financial year 2019.

CLICK HERE FOR YOUR FREE REPORT!
Tags:
Media Nine Entertainment Co. Holdings Limited (ASX: NEC) Seven West Media Limited (ASX: SWM) ASX: SXL
All pictures are copyright to their respective owner(s).Kalkinemedia.com does not claim ownership of any of the pictures displayed on this website unless stated otherwise. Some of the images used on this website are taken from the web and are believed to be in public domain. We have used reasonable efforts to accredit the source (public domain/CC0 status) to where it was found and indicated it below the image.