Sky Network Television Limited (NZX:SKT, ASX:SKT) is a satellite, streaming and free-to-air services provider, distributing content to viewers from one end of the country to other.

The Group operates in a rapidly changing industry, which has further picked up pace in the past year as more D2C services have been launched and alliances of major players are being forged globally. 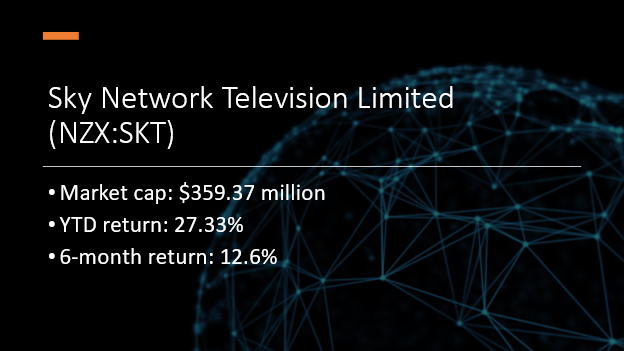 Sky continued with its positive momentum in FY21 with growth in streaming revenue, important programming renewals, continued reductions in Sky Box churn and the launch of Sky Broadband. The Group reported a profit after tax of $47.5 million compared to a loss of $156.8 million in previous year. Further, Sky’s adjusted NPAT of $47.1 million surpassed expectations and market guidance.

Sky expects to grow the top line and anticipates its revenue in the range of $715 million to $745 million in FY22. This can be achieved through a mix of improvements in core offerings, returning towards pre-COVID-19 levels in Advertising and Commercial, and new revenue streams.

RELATED ARTICLE: How is the YTD performance of 5 NZX stocks?

The Group’s strategy includes 4 major focus areas, which are

How Sky plans to deliver ahead?

The Group has implemented many key data and insight tools like Sky Nation and life-stage segmentation model to better understand customers and unlock growth prospects. Sky also has strong relationships with the biggest and the most renowned studios in the world and it plans to continue engaging in these partnerships to deliver Kiwis with the best content.

RELATED READ: How are these 3 NZX communication stocks performing amid frequent internet outages?

Sky is also evolving its Sky Box and streaming technology to provide customers with the best experience and using innovative technology to get attention from new fans. It is planning to launch a hybrid box that offers the reliability of satellite TV and the flexibility of internet-delivered on-demand content and streaming apps.

ALSO READ: Look at these 5 cheap NZX stocks under 50 cents

The Group also launched the updated version of the Sky Go app, built on new digital platform with many improvements at the end of FY21.