The Canadian industrial sector is known to be a major contributor to the country’s economy. Therefore, being a crucial part of it, the aviation industry too plays an important role in Canada’s growth.

After being severely beaten down by the pandemic, the aviation space has been slowly taking a turn for the better amid the easing of lockdown restrictions. A reflection of this improvement can be seen on the S&P/TSX Capped Industrial Index, which has risen by more than 20 per cent in 2021.

Keeping that in mind, let us explore two aviation stocks listed on the TSX.

Amid rising vaccination rates, the company saw a year-over-year (YoY) rise of 17 per cent in its business jet revenues of US$ 1.4 billion in the third quarter of fiscal 2021. In addition, its revenue from business aircraft services grew by US$ 76 million in the latest quarter. 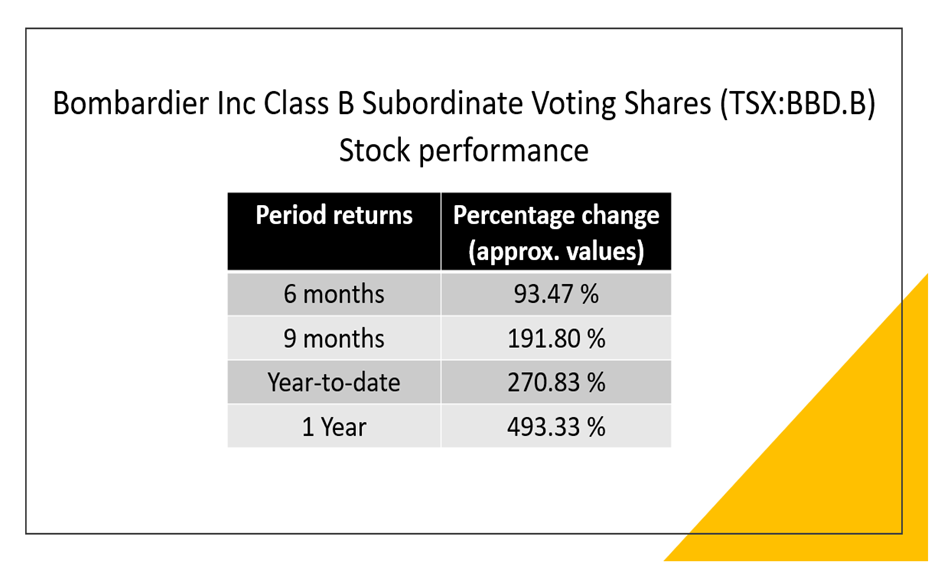 On the valuation front, Bombardier held a market capitalization of C$ 3.7 billion and a return on assets (ROA) of 23.06 per cent.

Montreal-based carrier Air Canada took quite a beating amid travel bans last year. But with the restrictions slowly going down, it reported a significant growth in its passenger counts and booking in the latest quarter.

Its cargo segment also noted a robust performance in its latest quarter, along with improvements in Air Canada Vacations and Aeroplan divisions as well.

On November 10, Air Canada signed a memorandum of understanding (MOU) with Carbon Engineering Ltd to explore its direct capture technology for aviation decarbonization.

As for its stock performance, Air Canada scrip jumped by more than five per cent in the last month. It surged by over seven per cent on a year-to-date (YTD) basis and expanded by nearly 18 per cent in the past year.

Although the rising inflation is something to keep in mind, the Canadian economy has been improving from its pandemic lows. This recovery is expected to the industrial growth of the country.

While the industrial sector is often overlooked by some investors due to its cash and expenditure intensity, it is also a sector that holds growth opportunities.