The Canadian economy saw inflation of 4.4 per cent year-over-year (YoY) in September a StatCan report Wednesday, October 20, said. However, investors in the industrial sector responded positively as the sector grew by 18.21 per cent on a year-to-date (YTD) basis.

On Wednesday, October 20, the Canadian S&P/TSE Capped Industrial Index jumped up by 1.602 per cent to 388.71 points at market close. This rise was primarily led by the Canadian National Railway Company (TSX:CNR) with a 5.2 per cent gain. In addition, Canadian Pacific Railway (TSX:CP) and TFI International (TFI) boosted their performances by more than one per cent each, thus making the Canadian industrial sector an attractive option for investors amid rising inflation.

Here are some of the top industrial stocks listed on the Toronto Stock Exchange (TSX) that are worth exploring. 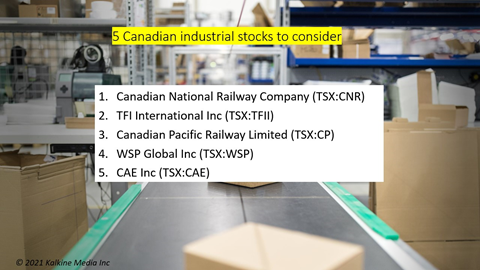 The stock of Canadian National Railway closed at C$ 161.53 on October 20 as President and CEO Jean-Jacques Ruest announced his retirement at the end of January 2022. At this closing price, it traded slightly up from its 52-week high of C$ 161.15 reached on September 7.

At the time of writing, Canadian National Railway stood at a market capitalization of C$ 114.51 billion. Additionally, it held a return on equity (ROE) of 20.89 per cent and return on assets (ROA) of 8.94 per cent.

The Montreal-based railway company noted a dividend yield of 1.523 per cent on Thursday, October 21. It is expected to doll out a quarterly dividend of C$ 0.615 per share on December 30, with December 8 mentioned as the ex-dividend-date.

The transportation and logistics firm TFI International noted its scrip wrapping trade up by 1.077 per cent at C$ 139.84 per share October 20. Its scrip was priced almost five per cent below its 52-week high of C$ 146.78 (September 2). 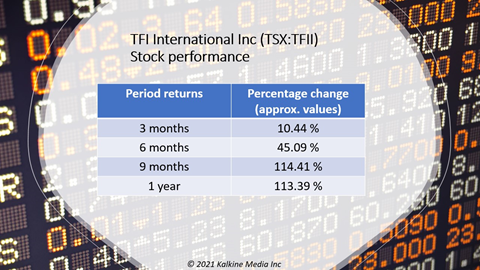 On the valuation front, the transportation firm recorded an ROE of 27.96 per cent and an ROA of 9.43 per cent as of October 21.

The railroad operator Canadian Pacific Railway Limited was priced at C$ 92.05 apiece, up by 1.354 per cent October 20 after reporting a YoY rise of four per cent in its latest quarter’s revenue. However, at this market closing, it had slipped by nearly eight per cent from its 52-week high of C$ 100 (as of June 2).

On October 21, the Calgary-headquartered Canadian Pacific Railway posted an ROE of 40.20 per cent and an ROA of 13.70 per cent. The company declared to pay C$ 0.19 per share as a quarterly dividend to shareholders on January 31, 2022 (ex-dividend-date December 30).

WSP Global stood with an ROE of 9.21 per cent and dolls out a dividend of C$ 0.375 to its shareholders every quarter.

Industrial stocks may not be as popular when compared to bank, energy and technology stocks, however, investors may consider the capabilities of the Canadian industrial sector and the above-mentioned industrial stocks for returns.

However, note that the market changes every day and it is of utmost importance to delve into your research to understand the fundamentals, financials, and factors crucial for the growth of industrial stocks and invest according to your risk-return profile.