Westpac Banking Corporation (ASX:WBC) has reported full-year results for the period ended 30 September 2020. Net profit for the year stood at $2.29 billion, down by 66% compared to the previous year. Cash earnings declined 62% year-on-year to $2.6 billion.

Westpac has maintained strong balance sheet with Common Equity Tier 1 capital ratio of 11.3%. During the year, customer deposits have increased by 6%, and the deposit to loan ratio is now over 80%. Westpac’s stressed exposure as a percentage of total committed exposure stood at 1.91%, up by 71 basis points compared to 2019.

Westpac has made important changes to the business such as new appointments in the executive team, adding over 400 people to the risk, compliance and financial crime team, and progressing the exit of several businesses. Moreover, the bank introduced a new operating model.

In 2020, Westpac took a major hit due to AUSTRAC proceedings, that ended with the bank paying a $1.3 billion penalty to settle the matter. The bank has commenced a process of fundamental change, and stepped up the management oversight of financial crime, compliance and conduct.

Westpac is looking to focus on core banking in Australia and New Zealand. It includes an enhanced operating model to align the business towards core offerings of mortgages, everyday banking, and business lending. 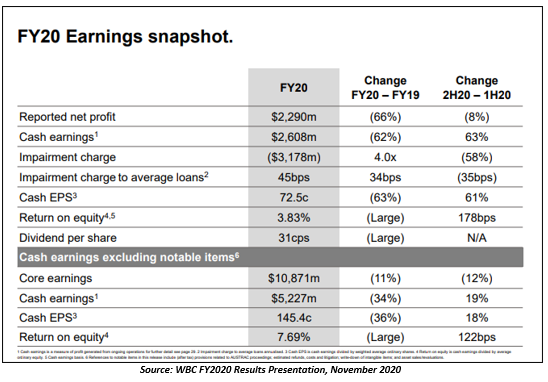 As of 28 October, customers on deferrals in business loans are down to $1 billion from $10.1 billion and mortgages down to $16.6 billion compared to $54.6 billion.

The Board has declared a fully franked final dividend of 31 cents per share to be paid on 18 December 2020. For FY2020, the dividend payout is 49% of statutory net profit and depicts the maximum under APRA guidelines.

It was acknowledged that the economic environment remains uncertain, but the budget announcements have provided a significant stimulus to businesses and households.

Westpac economists anticipate that at least half of the personal tax cuts would be spent and businesses would avail depreciation allowances.

Net wealth management and insurance income were down by 27% to $751 million from $1.02 billion.

Trading income was down by 4% to $895 million from $929 million, and other income increased to $249 million compared to $129 million in the previous year.