The group looks forward to investing in relationships and multiple resources for value creation. The company’s areas of operations cover all the stages of the oil production life cycle, from exploration to development and then to deliver sustainable growth. The group aims to create value for its host nations, its investors and most importantly, its people.

The company aims to find oil, to build resources and reserves, to sell, or to develop for future production through targeted exploration in South America and Africa. The company’s main objective is to capitalise on New Venture opportunities by managing risk exposure and building the best inventory of prospects for drilling and exploration.

The company is focused on development and appraisal with clear objective for monetisation. The company looks forward to investing in drilling in areas nearby to the company’s production assets for maximising returns. The company is coming up with significant discoveries in Uganda and Kenya, which shall increase the net production by 50,000 bopd.

The company has clarity on revenue generation as it has a clear plan on production. The company plans to increase and extend production across the production assets in the West African region by investing in in-field drilling programmes.

The company aims to create sustainable benefits along with value creation. The exploration and appraisal of the asset usually takes a time span of two to ten years with significant investment which includes Seismic surveys, exploration success followed by commercial viability of the project. This results in development of improved infrastructure or access to basic amenities such as water and other social investment projects.

This is further followed by the development stage which can take a period of three to ten years, in which the company draws first oil. This results in creation of jobs in the host countries and economic activity is strengthened.

The company then enters the production phase which ranges from a time frame of twenty to fifty years followed by decommissioning of the project. In the production phase, the host country is benefitted from taxation imposed on production and royalties. Furthermore, employment generation is consistent in the host nation and local suppliers can support economic activities. In the decommissioning phase, the local employment is generated for managing waste, fabrication and demolition.

The company opts for hedging and insurance to mitigate risks. The company manages all lifestyle stages proactively. The company aims to grow its production profile by progressing major development projects.

TLW-Board changes and guidance for the Financial Year 2020

The company released its guidance for the Financial Year 2020 and has made some important changes to the board of the company in a press release on 9th December 2019. Mark MacFarlane was appointed as a Chief Operating Officer and Dorothy Thompson was appointed as a temporary Executive Chair by the company. Angus McCoss, the Exploration Director of the group and Paul McDade (Chief Executive Officer) have left the company.

For the Financial year 2020, the forecasted value of production will range between 70 thousand to 80 thousand bopd, and at an average production of 70 thousand for the next three years.

On 12th February 2020, a more detailed operational and financial update will be provided at the company’s results. On 15 January 2020, the company is expected to release its trading statement on progress. 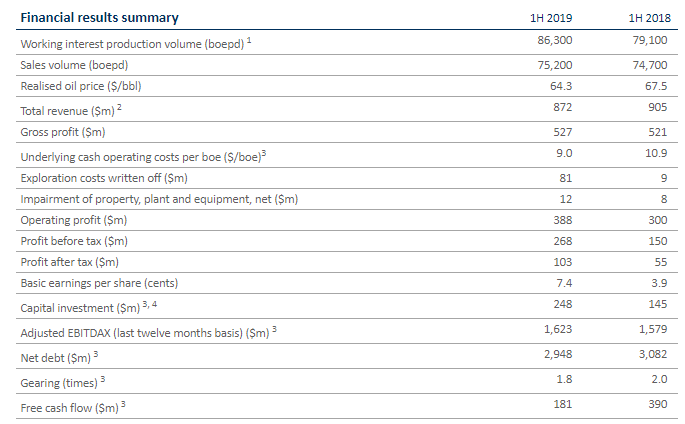 In line with the company’s policy, the management confirmed an interim dividend of 2.35 cents per share. The capex of the company was recorded at $248 million in the first half of the financial year 2019. The capex forecast remains unchanged at $570 million for the fiscal year 2019. In Kenya, the company signed terms with the Government and oil development has progressed well.

(Source: Thomson Reuters) Daily Chart as on Dec-13-19, before the LSE market close

At the time of writing at 09:09 AM Greenwich Mean Time, on 13th December 2019, the shares of Tullow Oil Plc were trading at a current market price of GBX 65.28 per share, which were up by 7.62 per cent from the last closing price on the previous day. While writing, the group’s market capitalisation was approximately £853.23 million.

However, in just three days’ trade, the stock price zoomed to GBX 60.66 on 12th December 2019 from GBX 39.94 on 9th December 2019 due to production guidance for the fiscal year 2020 and the company is committed to reduce its cost base and generate sustainable free cash flow.