How are 5 NZX retail stocks doing amid sharp rise in imports?

Stats NZ revealed on Thursday that NZ’s monthly value of goods imports in October 2021 has increased 26% to $1.4 billion compared to the same month last year. The increase was driven by increases in mechanical machinery and equipment as well as vehicles, parts, and accessories.

Annual goods imports witnessed a rise of 16% on pcp to $67 billion, while goods exports rose 3.3% to $62 billion for the year ended October 2021. Subsequently, the annual goods trade balance saw a deficit of $4.9 billion.

On this note, let’s take a look at how these 5 retail stocks are doing. 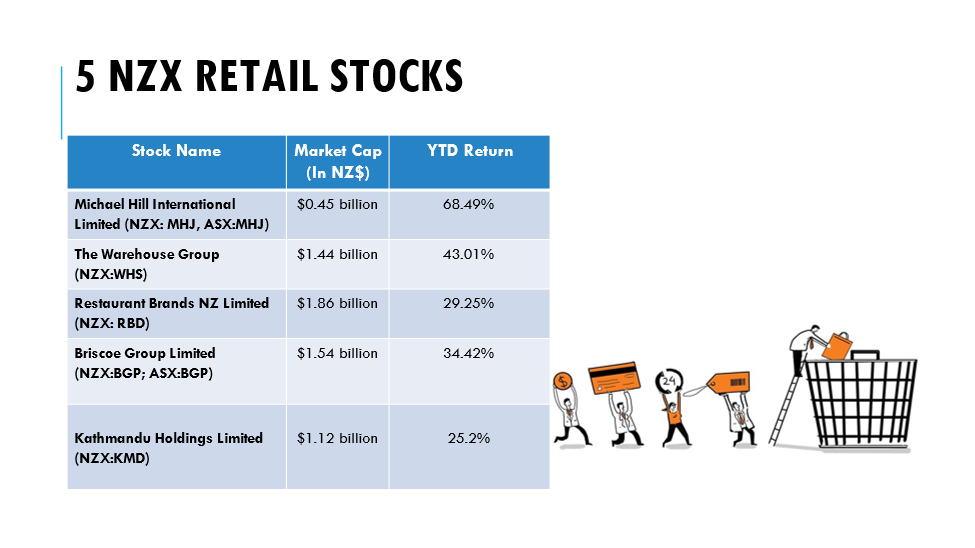 Jewelry retailer, Michael Hill, posted a rise in all its metrics in FY21. In Q1 FY22, the Group achieved a 15.5% rise in same-store sales and an increase in margins of 100 to 200 bps across all markets.

In comparison to Q1FY21, digital sales increased by 58.2% during the quarter, accounting for 9.4% of total sales. MHJ also declared a final dividend of A$3cps, taking the total dividend to A$4.5cps for FY21.

DO READ: Which 2 NZX retail stocks to be explored before holiday season?

WHS is due to pay a final dividend of 17.5cps on 3 December, taking the total dividend to 35.5cps for the full year.

The increase in sales comes as stores’ closure in August and September in NZ was offset by another 2 months of trading from its recently acquired California business.

Homeware, sporting goods, and retail sector retailer, Briscoe Group's revenues declined by 14% to $138.5 million in the 13 weeks ending 31 October 2021 on a pcp basis.

DO READ: How have 5 NZX retail stocks been faring amid falling sales?

All three BGP stores remained closed for the first three weeks of the shutdown, which began on August 18. The potential impact of these lockdowns was reduced in the quarter by a 98% rise in online sales.

Clothing and sports equipment provider for travel, Kathmandu Holdings, provided its annual meeting transcript on Thursday. The Group reported a 15.1% rise in total Group sales on pcp to $922.8 million and a 35.9% increase in EBITDA to $113.3 million in FY21. KMD also gained from a full 12 months of Rip Curl ownership in FY21.

However, the Group’s first quarter of FY22 was significantly affected by COVID-19-related closures, majorly in New Zealand, New South Wales and Victorian markets.

Retail companies have been significantly impacted due to COVID-19 lockdowns. However, the easing of COVID-19 curbs can help in improving their situation.