Which NZX companies are prominent in infrastructure space?

The infrastructure sector of a country includes water, transport, roads, bridges, power and urban infrastructure development. These systems are vital for the economic development of a nation and require high investment.

Let’s skim through the most prominent companies listed on the NZX in this space. 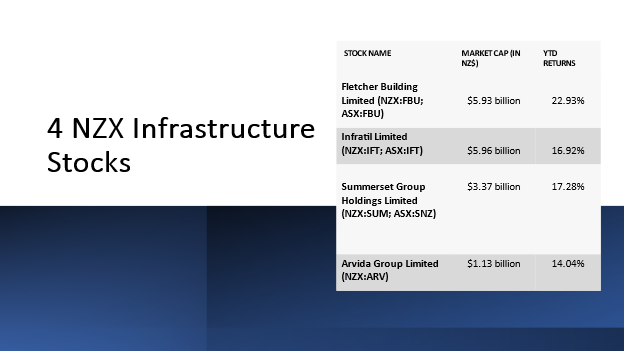 Fletcher Building is involved in the manufacturing and distribution of building products in NZ and Australia. FBU witnessed strong results in FY21, registering a revenue of $8.1 billion and an EBIT of $669 million for the period.

Fletcher has a positive market outlook and expects its 2H22 margin to show good progress towards its target of c.10% EBIT margin in FY23.

Infratil is a Wellington-based investor in energy and infrastructure businesses. The Group committed 120-130 million GBP of capital to London-based data centre Kao Data in October.

ALSO READ: Infratil (NZX:IFT): What are its guidance and outlook for FY22?

Infratil will get a 40% interest alongside its current owners and intends to build a 500 million GBP multi-site data centre platform in the medium term.

Summerset is one of the leading operators and developers of retirement villages in NZ. The Group posted solid growth in its resale and new sales figures in Q3 2021 with nearly 744 sales for the 9 months ended September 2021.

RELATED READ: Summerset (NZX:SUM) How did it perform in 3Q 2021 amid lockdown?

The Group pre-sold all its independent living units that were to be delivered over the next six months at its new Mt Denby retirement village in Whangarei.

An amount of $330 million was raised under the Rights offer and the Placement was done to raise capital to fund Arena Living’s six retirement villages.

The settlement and allotment of new shares that were taken under the shortfall bookbuild are likely to happen on 15 November 2021.

Infrastructure development is significant for an economy’s progress.