The telecommunications sector includes companies that have made data to be sent and communication possible worldwide through phone, the internet, cables or wires.

New Zealand has a mature and competitive telecom sector, where Fixed-line broadband and telephone services are largely provided through copper-based networks. The COVID-19 pandemic highlighted the importance that the telecom sector has and exposed barriers faced by the sector.

Amid this backdrop, let’s cast a glance at how these 3 telcos are performing. 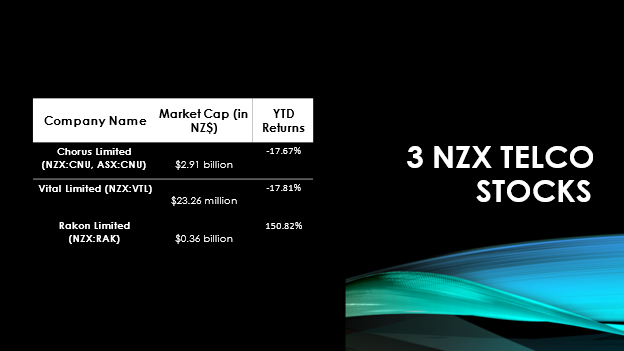 The Group reported that total fibre connections had increased to 894,000 in Q1, up by 23K despite reduced volumes under Alert Level 3 and the halt of installation activity in Alert Level 4 lockdowns across major centres in the latter half of the quarter.

ALSO READ: How Chorus (NZX:CNU) has transitioned towards a new dividend policy

Fibre uptake across the completed UFB path increased from 65% to 66% in the period while copper broadband and voice connections declined by 32K.

Vital saw growth in both revenue and profits in FY21 despite lockdowns affecting its business plans. Vital successfully completed its fibre network in Wellington CBD and the related switchover to new electronics.

The Group also updated that Vital had not been chosen as the preferred party to provide the Land Mobile Radio network as a part of the intended new Public Safety Network for emergency services across NZ.

Also Read: How are these 3 NZX Communication Stocks doing?

The group is forecasting its debt to increase 3-5% in the next 12 months and a capital expenditure of $5.3 million for the year ending 30 June 2022.

Rakon announced an upgrade in its FY22 profit outlook. In FY22, the Group now forecasts its underlying EBITDA to be in the range of $39 million to $44 million, up from the previously stated range of $27 million to 32 million.

This was due to the company receiving large orders for its TCXO2 as a result of a significant chip shortage caused by a fire at an AKM facility.

Steven Tucker has been appointed by the Board of Directors as an independent non-executive director.

As per the NZ Infrastructure Commission, 87% of Kiwis will have access to fibre by the end of 2022. Further, the need for both speed and amount of data is projected to increase considerably in coming years.