Let us take a look at the top developments across Kiwiland, hogging the attention of NZ residents. 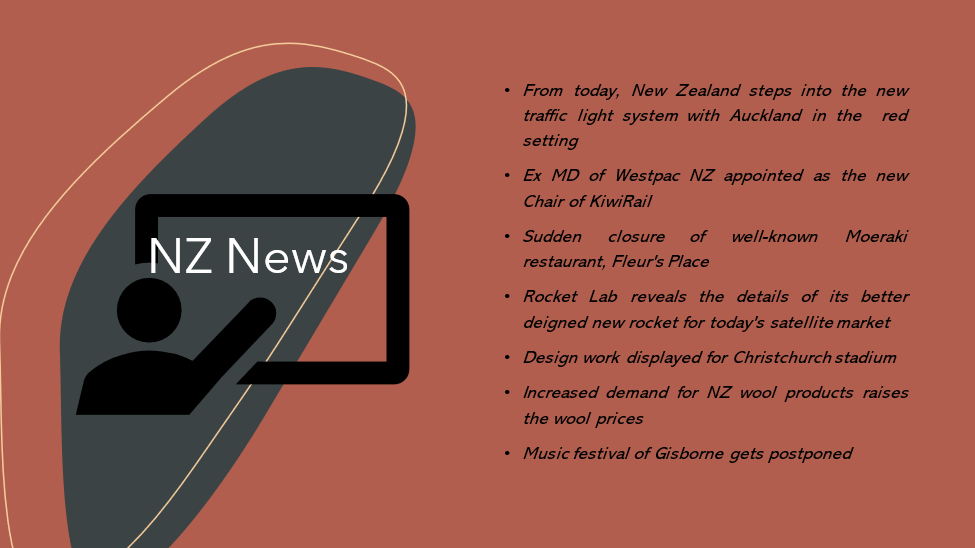 From now, the whole of New Zealand, the North Island, has stepped into the new COVID-19 Protection Framework. Aucklanders can now go to cafes, gyms, restaurants, etc., after spending more than 100 days under lockdown.

It is noted that while Auckland, Northland, Gisborne, Rangitikei, etc., are in the red zone, the entire South Island and parts of the North Island are in the orange setting.

David McLean, who was earlier the MD of Westpac NZ, has been appointed the Chairman of KiwiRail.

His tenure as a chair would commence from January 2022 and is up till October 2024.

Do Read: KiwiRail may have to pay a NZ$250,000 fine to Auckland Transport

Fleur's Place, a famous seaside restaurant at Moeraki, has been temporarily shut down for 3 December so as to facilitate its employees in understanding new rules over compulsory vaccinations for staff.

The said move was taken as there was confusion over the rules for whether unvaccinated people in the hospitality sector could work or not under the new traffic light protection framework.

Rocket Lab, the aerospace company, has disclosed more details of its bigger Neutron rocket, which could carry up to 8 tonnes into space and can also take both people and cargo for interplanetary missions.

Owing to industrial base reasons, the rocket is set to be launched from the US.

The arena would have a seating capacity of 30,000 for sporting events, which could be extended to 37,800 for concerts, etc.

As per reports, prices of all wool types are rising owing to increased demand.

It is noted that Merino rose by 28.4%, and strong wool climbed by 12.1% in the year to October 2021, underpinned by a strong crossbreed space and the resurgence of demand, particularly from the Indian market.

Music festival of Gisborne gets postponed

The Gisborne music festival which is usually held between 28-31 December has been postponed.

The festival, which attracts nearly 30,000 people, will now be conducted during the Easter weekend of 2022.

It is noted that those who had already purchased the tickets can use their tickets for the new date or could get a refund by 16 December.