Well, what a year it has been so far for the Canadian oil and gas sector. The S&P/TSX Capped Energy Index has rocketed a whopping 56.3 per cent year-to-date (YTD).

How has this happened? Well, production reduced during the pandemic years and when the world was ready to open up again, it was faced with supply issues.

Then, Russia invaded Ukraine and was swiftly hit with sanctions. Further, the OPEC countries let down expectations and failed to increase their output in April over capacity issues.

And now, the EU is mulling completely banning all Russian oil and to end their dependence on the country. As the news broke, oil prices spiked. Brent oil was up 4.93 per cent and crude oil was up 5.27 per cent.

Subsequently, Canadian oil and gas companies were among the top gainers of the day. They stand to gain if the EU impose a complete ban on Russian oil.

In view of that, let’s take a look at 5 TSX-listed oil and gas companies that make for an interesting watch.

ARX’s growth over the last year has been steady and it has gained 136 per cent in 12 months. It is up 67 per cent YTD.

The stock’s price-to-earnings (P/E) ratio, which denotes the number of dollars that has to be invested for one dollar of earnings, is 12.3. Its dividend yield is over two per cent

Like ARX, its trajectory over the past year has largely headed one way – north. It has ballooned nearly 200 per cent in 12 months and 75 per cent this year.

VET’s P/E ratio is 3.7, which means the amount to be invested to earn a dollar is much lesser than that of ARX.

The stock’s dividend yield is 0.87 per cent.

Paramount’s stock closed at C$35.83 Wednesday and was TSX’s biggest gainer of the day, having risen 12 per cent. What is more is that during the day’s trade, it touched its 52-week high of C$36.

Its growth trajectory over the last year has been mildly more choppy than the previous two stocks mentioned but it has generally headed upward, increasing 194 per cent on a 12-month basis and 46 per cent on a YTD basis. 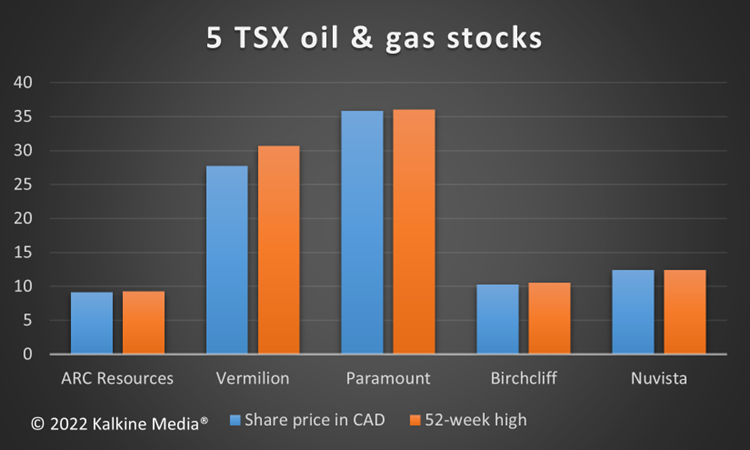 As seen in the graphic, these stocks are trading near to their 52-week highs. However, there is no saying that they won’t breach those highs.

After all, they have, for the most part, been heading north over the past year and, if the EU ban goes through, there can be a permanent end to Russian crude exports to Europe in as soon as six months and refined oil in as soon as a year.