Pot and clean-energy stocks and ETFs trended in pre-markets on Thursday morning (January 7) after the US Congress formally upheld Joe Biden’s 2020 presidential win.

The S&P Global Clean Energy Index popped up as much as 7.80 per cent on Wednesday (January 6), climbing on the back of blue wave in the US Senate. Oil price also jumped after Saudi Arabia’s decision to cut production by 1 million barrels per day (BPD), beginning February this year. Consequently, the WTI benchmark surpassed US$ 50 per barrel for the first time since February 2020.

The New York City Governor Andrew M. Cuomo reiterated his promise with a proposal to legalize weed on Wednesday. This proposal includes a new office to regulate the cannabis market and better prospects for communities who faced prosecution due to cannabis. New York legalized possession of the small amount of cannabis in 2019. The US president-elect Joe Biden is also set to decriminalize recreational-use marijuana federally.

In the wake of the above developments, the following energy and marijuana ETFs (Exchange Traded Funds) are trending:

The iShares ETF actively follows the S&P Global Clean Energy Index. The energy-based ETF primarily invests nearly 90 per cent of its fund in constituents of the index. Almost 10 per cent of the investment goes into futures and options, and exchange contracts.

ICLN’s price surged over 7 per cent on January 6, and over 21 million units exchanged hands. Its 10-day average trading volume stands at 8.43 million units. In the last three months, the fund has yielded 49 per cent growth.

The fund has a current market cap of US$ 5.25 billion. It is delivering a positive return on equity of 6.97 per cent. The clean energy ETF pays a semi-annual dividend of US$ 0.03, with a current dividend yield of 0.263 per cent, as per data the TMX portal. 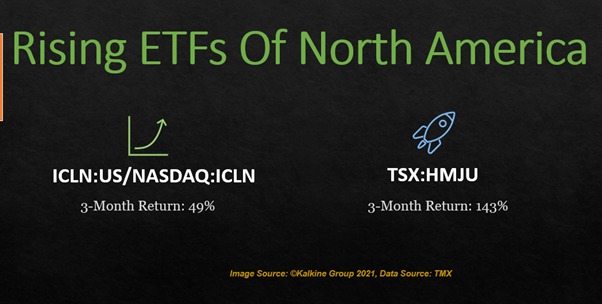 The Cannabis fund gained nearly 17.5 per cent on January 6. In contrast, the S&P/TSX Cannabis Index increased by over 10 per cent.

It has total outstanding listed shares of 367.5 thousand and a current market cap of C$ 9.55 million, according to TMX data.