Stocks in the North American markets opened higher on Thursday, January 14, as investors looked to bet on a better stimulus package announcement in the US. The Dow Jones Industrial Average jumped 0.3 per cent soon after the opening bell, while the S&P 500 gained 0.2 per cent and the Nasdaq Composite improved by about 0.5 per cent early on Thursday morning.

Treasury yields have also jumped on the back optimistic sentiments.

In Canada, the Toronto Stock Exchange (TSX) Composite Index is trading in the green, as the cannabis sector rallies in the hopes of federal pot legalization in the US. Aphria’s latest quarter results have also fuelled the pot rally.

The S&P/TSX Capped Health Care Index has surged as much as 3.6 per cent in the early trading hours of Thursday, steered by Aphria stocks.

US President-elect Joe Biden is reportedly set to announce a U$ 2 trillion relief package at an event after the US market closes in the evening. Of this, the COVID-exclusive slice is likely to be about US$ 900 billion, as per reports.

Transition officials created a proposal with the Democrat party’s elected policymakers and their team that is expected a holistic distribution of the planned stimulus package. 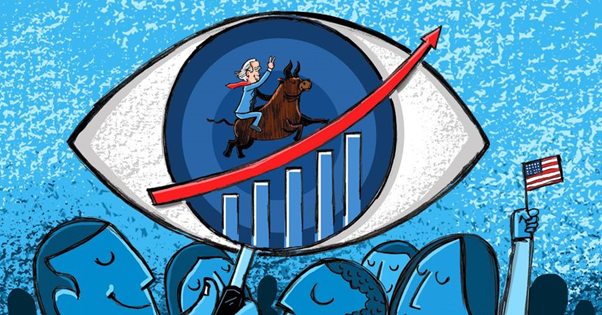 Just a week after the Capitol Hill siege event and amid a sensitive political mood fuelled by the second impeachment of outgoing President Donald Trump, Joe Biden is looking for significant cross-party backing for his coronavirus relief plan.