A lot is happening in China right now that seems to be affecting markets all around the world.

Early last week, the crisis of Chinese property guru Evergrande Group reverberated through global stock exchanges. Then came the Chinese government’s complete clampdown on cryptocurrencies, followed by further reports on its own CDBCs.

Adding to that, Huawei Technologies’ chief financial officer Meng Wanzhou, who was under house arrest in Vancouver while facing extradition to the US on fraud charges, was allowed to fly back home in China. This unexpected turn in a diplomatic crisis, one that was brewing between Canada, the US, and China, came up as Canadian diplomats Michael Kovrig and Michael Spavor were released from Chinese jails.

How are all these events impacting Canada and its stock markets? Let’s find out.

Troubles arose for the Chinese real estate giant after its massive debt loads, reportedly of about two trillion yuan, (approximately US$ 300 billion), came into the limelight following a government probe.

In the wake of this development, Evergrande’s Hong Stock Exchange (HKEX)-listed stocks nosedived, taking the market’s benchmark Hang Seng Index down by over three per cent on September 20, its largest drop since July 2021.

Canada, on the other hand, saw the Toronto Stock Exchange (TSX) futures dip to a two-month low on September 20. The TSX composite index went on to settle 335.82 points or 1.63 per cent lower at 20,154.54 last week Monday as all the 11 major sectors declined notably.

Speculations around Evergrande having missed a debt payment has further stoked concerns about its solvency and spillover effect on the world economy.

While still feeling the heat from the Evergrande crisis, markets around the globe felt another punch early last Friday as China declared all cryptocurrencies illegal in the country.

The S&P/TSX composite index managed to gain 1.31 per cent on Friday, but the combined effect of the Evergrande crisis, China’s crypto ban and other factors dragged the main Canadian bourse for the third week in a row.

The digital currency crackdown across the Pacific saw Canadian Bitcoin miner Hut 8 Mining Corp (TSXV:HUT) stocks plunge by 5.3 per cent last Friday. On Monday, September 27, however, the crypto stock returned to the green zone with a 3.19 per cent spike (10.44AM EST).

While concerns in the real estate market rose amid the Evergrande crisis, the crypto ban hit the technology sector in particular. The S&P/TSX Capped Information Technology Index tumble by 1.16 per cent on September 24.

In what may be a knock-on effect to a certain extent, the TSX’s healthcare sector fell by as much as 5.01 per cent on Friday, while energy was down 2.84 per cent and industrials was down 1.78 per cent.

Also read: TSX down in every sector amid Canada election & Evergrande crisis 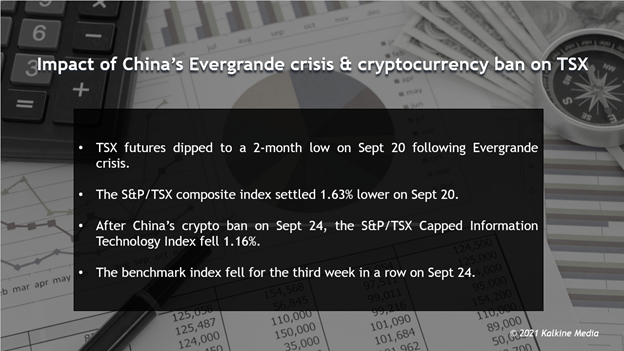 So, what happens now?

On Monday morning, September 27, December futures on the S&P/TSX index rose by 0.2 per cent, as of 7AM EST. The spike came as oil prices shot up by over a per cent in the midst of a rising global demand in the wake of eased pandemic restrictions.

Some market commentators, however, note that a ripple effect can arise from these events in China, one that may not just impact other market sectors but also commodity prices, interest rates, etc.

The S&P/TSX composite index recorded gains for seven straight months as of August this year. But amid all the crises, it has dipped by three per cent this month. This, as of now, appears to have put the Canadian benchmark index on course to lose this winning streak in September.