Explorer and developer of gold, base metals, heavy mineral sands (HMS) and other commodities, MRG Metals Limited (ASX: MRQ) operates in Australia and overseas. It is renowned for its exploration projects, which form the crux of the Company’s success.

In today’s article, let us acquaint ourselves with MRQ’s exploration projects:

The biggest highlight of FY19 for MRQ was the successful completion of the acquisition of the highly prospective Heavy Mineral Sands Project in Mozambique, for which, Australian projects were relinquished so that the Company can concentrate on the HMS Project.

MRQ had intimated the probable acquisition in November 2018, after it was re-negotiated for reduced consideration, wherein MRQ purchased all of the shares in Trophosys Pty Ltd and Sofala Resources Pty Ltd which included Mozambique Company holding the agreed Heavy Mineral Sands assets.

Exploration to date in the HMS Project has shown excellent results, with the Company recently informing that its ongoing aircore drilling campaign has defined 20km2 of high grade heavy mineral sands at its 100% owned Koko Masava project, which is shaping up to be another one of Mozambique’s large heavy mineral sands projects as MRQ enters the early stages of its exploration initiatives.

There is significant opportunity to rapidly add value through low cost exploration activities over areas of known HMS mineralisation to discover large tonnage, high grade sweet spots and high unit value resources, with the potential for a long mine life mining asset under a number of staged mining and process scenarios.

For a strong competitive edge, MRQ has assembled a high calibre and experienced team, with unique knowledge of HMS prospectivity in Mozambique, to advance the core Corridor projects and other tenements pending grant. 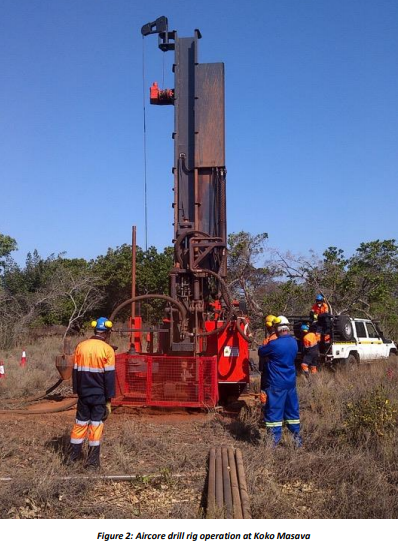 Moreover, MRQ is surrounded by some world-class neighboring deposits, as metals and mining giant Rio Tinto with its JV partner Savannah Resources is developing the Mutamba and Chilubane projects. On the other side, Chinese firm Dingsheng Minerals is developing the Corridor Sands (immediately northwest of the Company’s tenements) as it signed an agreement with the Government of Mozambique.

The Corridor Projects consists of Corridor Central and Corridor South licenses and lie on the north-eastern side of the Limpopo River alluvial plain.

Both these tenements are strategically located ~10km south of the Corridor Sands (where Dingsheng Minerals has spent in excess of US$1 Billion), and Rio Tinto and Savannah Resources plan to develop the Chilubane Deposit (10km south of the MRQ’s Corridor projects).

The Project is located directly south of the Mutamba Project (located in Inhambane Province) operated by the Rio Tinto / Savannah JV and comprises of 113km2. It includes a 20km strike of prospective palaeodunal traits that are defined by the 100m topographic contour (adjacent to the present coast).

Summary lab results for the auger drilling (conducted by Rio Tinto) within the Project depict continuous zones of high grade THM to depths of 10.5m, ranging in grade from 5% to 25% THM.

The Marão and Marruca Exploration Projects

These project applications are adjacent and comprise of 491km2 with ~75km of strike of interpreted palaeocoastline. They cover an ancient Heavy Mineral strandline and the Marao licence was previously drilled by Rio Tinto, though the Marruca application along strike remains untested.

The more significant drill results are inclusive of 9m @ 2.85%THM, with slimes typically 10% or less.

In 2014, MRQ entered into a non-binding Heads of Agreement with Mandalay Resources Corporation at the Norrliden project in Sweden, who acquired the Norrliden project as part of the Elgin acquisition. Mandalay Resources further chose not to develop the project themselves. It shall indeed retain the right to claw- back the project in case a significantly larger stand-alone discovery be made.

In FY19, the Company and Mandalay Resources marketed the Norrliden project for sale.

For updates and insight regarding MRQ, we encourage you to watch out this space in the coming days.