The decision to undertake a formal review for the Mining Area C (or MCA) royalty tailed a substantial contribution, which the current and future materiality of MAC provides to the company’s overall valuation.

The formal review, which Iluka commenced in September 2019 would consider a range of options related to its corporate and capital structure including a structural separation of MAC by way of demerger, estimated by few fund managers including L1 Capital to generate over $2 billion for the shareholders of the company.

However, while the market is gung-ho about the demerger, Iluka mentioned that the review might not lead to any structural change and the company would notify the stakeholders about the results of the review along with the full-year results in February 2020.

BHP- the operator of the low-cost, high-grade MAC area is progressing through the development of the South Flank (completed 50 per cent as on 30 September), and the miner stated that with the development of the South Flank, the expanded capacity of the MAC hub would reach 145 million wet metric tonnes per annum with production near to the capacity anticipated from 2023 onwards.

The development work at the South Flank holds immense potential as post the completion it could materially increase the cash flows for Iluka from MAC, subject to various factors including the iron ore prices in the global market and USD: AUD exchange rate.

The zircon production during the quarter stood at 93.5kt, up by almost 29 per cent from the previous June 2019 quarter, but down by 3.10 per cent against the previous corresponding quarter in 2018.

The production of total mineral sands surged by over 19.25 per cent against the June 2019 quarter to stand at 299.7kt; however, against the previous corresponding quarter in 2018 there was a drop of 4 per cent.

The total mineral sands sales dropped by 25 per cent during the September 2019 quarter to stand at 167.1kt against the previous quarter sales of 222.8kt in June 2019 quarter.

The production and sales of zircon, rutile and synthetic rutile remained as below: 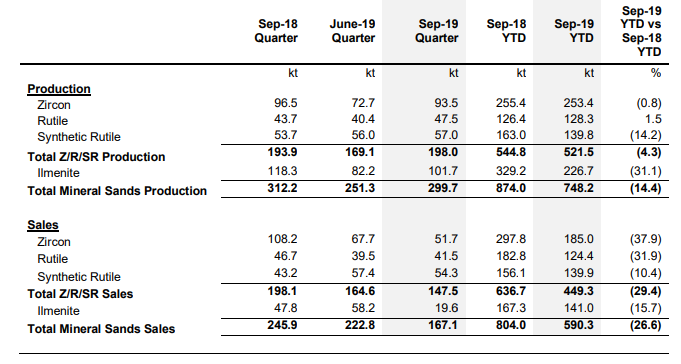 On a YTD basis (as on 30 September 2019), the mineral sands revenue stood at $798.4 million, which marked a downfall of 13.8 per cent against the previous corresponding period. 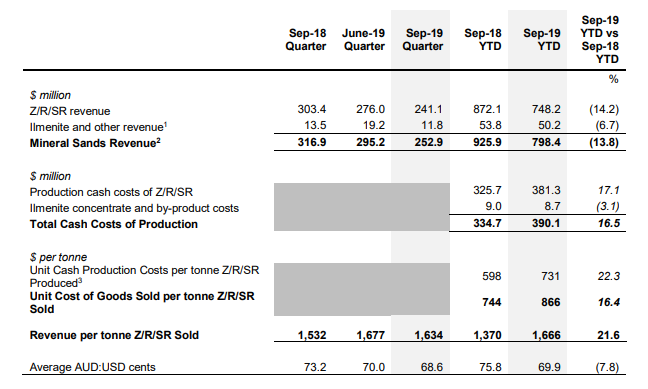 The global economic uncertainties kept a lid on the zircon market as business sentiment remains subdued, which in turn, prompted many businesses to reduce the zircon inventories throughout the supply chain.

In China and Southern Europe, the ceramics applications remained affected and exerted pressure on the sales volume and prices. The tension over the U.S-China trade war impacted the foundry and refractory industries.

However, Iluka introduced various measures to support the customer base in a challenging environment. The company enhanced the loyalty rewards and adjusted the product offering, which in turn, delivered satisfactory outcomes to the company during the September 2019 quarter.

The high-grade titanium feedstock market remained steady during the September 2019 quarter, and customers took all available spot and contracted volumes.

North America continued to be the steadiest regional market, while other markets such as China, Europe, etc., remained turbulent during the quarter amid geopolitical issues such as U.S-China trade war and Brexit.

The production of heavy mineral concentrate from the Cataby mine stood at 153kt on a YTD basis. Iluka carries the magnetic material from the Cataby operation for further processing and upgrading it from ilmenite to synthetic rutile at the SR2 kiln in Capel.

The rutile production at the Sierra Leone Operations remained 3kt above the June 2019 quarter production of 30kt. The company started the Gangama expansion in June 2019, while the Lanti expansion is in a ramp-up phase and anticipated by the company to get complete in the December 2019 quarter.

MSP, which currently holds an annual capacity of around 175 thousand tonnes per annum of rutile produced 13kt of rutile in September 2019. Iluka anticipates the MSP to operate at the full capacity during the remaining 2019.

The production during the September 2019 quarter was affected by lower than expected ore throughputs and runtimes, which in turn, further unfolded materials handling issues at Lanti. The wet season conditions, which interrupted the mining activities coupled with power and maintenance outages, exerted pressure on the production.