Sandfire Resources NL (ASX: SFR) is involved in the production and sale of copper concentrate, containing gold and silver by-products from the Group’s 100% owned DeGrussa operations in Western Australia. It is also involved in the exploration, evaluation and development of mineral tenements and projects in Australia and overseas, including investment in early-stage mineral exploration companies.

According to the released results for FY19, total revenue for the period was noted at $592.2 Mn, up ~3.9% over the previous year. Total revenue was majorly contributed by sales of copper at 87.1%, whereas sales of gold and silver contributed 11.8% and 1.1%, respectively, to the company’s revenue. Moreover, fall in Copper prices was offset by weaker Australian Dollar and record low C1 costs at the DeGrussa Operation.

This outstanding result reflects company’s 2nd best financial performance in its 7 years of operation. This underpins consistency and quality of the DeGrussa Operation as well as determines company’s growth aspirations to build a diversified portfolio of high-quality base metal assets. 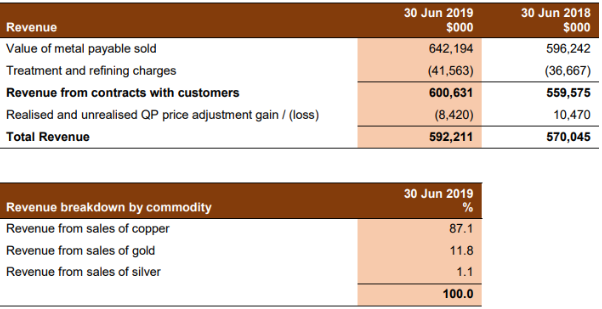 Resolute Mining Limited (ASX: RSG) is a gold mining company with more than 30 years of operations. The company’s operates as an explorer and developerof gold mines in Australia and Africa. These mines have had a cumulative output of more than 8 million ounces of gold. It currently owns gold mines, namely, the Mako Gold mine, the Bibiani Gold mine, the Ravenswood Gold mine and the Syama Gold mine in Senegal, Ghana, Australia and Mali, respectively.

As per the annual report for FY18 (for the period of July 1, 2018 to December 31, 2018), the gold production stood at 129,199 oz at the All-In Sustaining Costs of $1,449 per oz. The company generated a revenue of $223 Mn from gold sales of 128,275 ounces at an average realised price of $1,734 per oz, which was close to the average gold spot price over the period at $1,690 per oz. The gross profit from operations was reported at $24 Mn after depreciation and amortization (related to gold sales) of $10 Mn. RSG reported a net loss after tax of $5 Mn, which was inclusive of an adverse movement in the valuation of net realisable inventory of $29 Mn offset by $15.5 Mn of unrealised foreign exchange gain on intercompany loans. The company continued to invest heavily in the business during the period with Capital Expenditures on development, property, plant and equipment totalling $175 Mn and exploration and evaluation expenditure of $10 Mn.

Aurelia Metals Limited (ASX: AMI) is involved in the gold, copper, lead and zinc production and mineral exploration from Hera and Peak mines. Its revenue is majorly derived from bullion and base metal sales.

The company is a multinational gold producer and is listed on the ASX (ASX: OGC). Its productive assets are located in the Philippines, New Zealand and the United States.

The company recently published its operational and financial results for the Q2FY19. It highlighted that its operation, particularly at Haile, had a significant improvement from the previous quarter with the production growth of 45%. Its total material mined at Haile increased by 45% (Q-o-Q) and its unit cash costs decreased by 39%. The company accelerated pre-stripping activities under improved weather conditions at the Red Hill pit during the period, leading to approximately one quarter ahead of schedule. 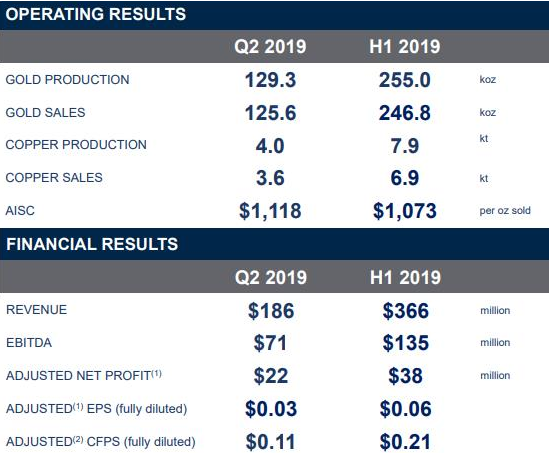 Westgold Resources Limited (ASX: WGX) is primarily involved in the exploration, development, and operation of gold mines. Its operations are concentrated primarily in Western Australia.

The company recently informed the market that Liontown Resources Ltd had inked a formal sale agreement with Westgold Resources Limited to acquire the revenue and production royalties relating to lithium and related minerals over its 100%-owned Buldania Lithium Project in Western Australia. The royalties comprise production royalty of A$2 per tonne of ore mined and/or processed from three key tenements (E63/856, P63/1977 and M63/647) and 1.5% gross revenue royalty and are being acquired for a total consideration of $2 Mn in cash. The location of Buldania is around thirty-kilometre east of Norseman, which is Liontown’s 2nd Western Australia lithium project and is being progressed alongside its flagship Kathleen Valley Lithium Project, where substantial resource spudding program is in progress.