The economy of Australia is counted amongst one of the most resilient economies across the world that performed strongly during the global financial crisis. However, the country?s economy is currently in a challenging state with record low interest rates, subdued inflation and high unemployment.

As per recent data announced by the Australian Bureau of Statistics (ABS), retail sales experienced an unexpected fall of 0.1 per cent in the September quarter against expectations of a 0.2 per cent rise in retail turnover. In addition, the retail sales increased in September by 0.2 per cent, which was lower than August?s rise of 0.4 per cent.

Though the retail sales data was quite disappointing, the Reserve Bank of Australia (RBA) kept the official cash rate on hold at 0.75 per cent in November to judge the economic impact of government tax handouts and low borrowing costs. The decision was taken on the back of strengthening property market in the economy.

The RBA?s decision was widely anticipated by the market experts who pegged down the expectations of a rate cut to around 6 per cent for November before the announcement. The central bank kept the cash rate steady but did not rule out the expectations of a further rate cut moving forward. Consequently, market experts are predicting further rate cuts in the coming months.

However, some of the recent developments have raised fresh hopes of a revival in the country?s economy, which include the following:

A recently announced ABS data showed that Australia attained a record high trade surplus of $7.5 billion in September in trend terms, observing a rise of $169 million on the prior month?s surplus.

Moreover, the country?s trade surplus was recorded at ~$7.2 billion in September in seasonally adjusted terms, marking an increase of $563 million on the surplus reported in August 2019. The trade surplus was well ahead of economists? forecast of $5.1 billion.

In quarterly terms, the trade surplus was $21.1 billion in the September quarter, $2.5 billion higher than the seasonally adjusted balances for the three months to June 2019.

In seasonally adjusted terms, exports increased 3 per cent or $1.45 billion to $43.2 billion in September, along with an increase of 3 per cent or $889 million in imports of goods and services.

As per the market experts, the September data indicated that the US-China trade war is having a minimal impact on the Australian economy. The global issues, including Brexit, US-china trade differences, a slowdown in the Chinese economy, etc. were not reflected in the country?s trade balance.

Improvement in Property Prices in October

The property prices have begun to improve in Australia, indicated the recently released CoreLogic?s home value index for October. The data demonstrated a rise of 1.2 per cent in house prices in October, marking the largest increase since May 2015 and fourth straight monthly increase since July 2019.

The house prices increased substantially in Sydney and Melbourne by 1.7 per cent and 2.3 per cent, respectively, while the prices declined by 0.4 per cent in Perth. The 2.3 per cent rise in Melbourne was the largest month-on-month increase seen in the city since November 2009.

The figures suggest a rebound in the country?s property market, driven by a reduction in the cash rate by RBA and Australian Prudential Regulation Authority?s (APRA) modified mortgage serviceability rules.

Few market experts are of the opinion that if the property prices continue to grow at the same pace as they are increasing now, the country might see the house prices breaking their all-time high levels by early 2020. 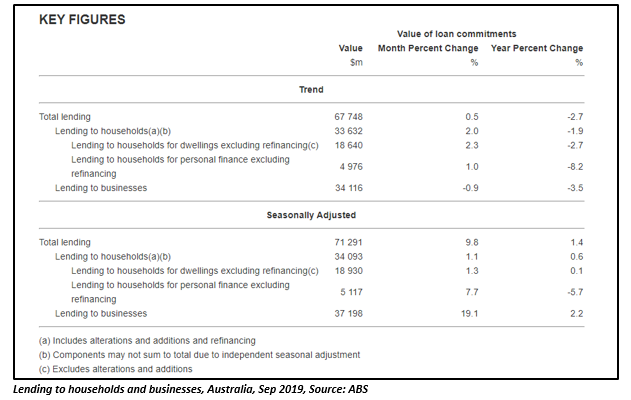 All states and territories of Australia apart from the Australian Capital Territory contributed to an increase in lending for owner occupier commitments during the month. Also, new lending commitments for investment dwellings declined by 4 per cent in September, driven by a 6.5 per cent fall in Victoria and a 7 per cent drop in Queensland.

September?s data on lending commitments to the households indicated an improvement in the country?s property market that has been under pressure for the last few months.

As per the RBA, the turnaround in the housing market came sooner than expected with an improvement in auction clearance rates, housing prices and housing loan approvals.

Recently, the central bank has also released its Statement on Monetary Policy for November 2019, wherein the bank has revised its forecasts on different macro-economic indicators as discussed below:

Though the country?s economy observed a lower than expected growth of 1.4 per cent over the year to the June quarter, the bank expects the domestic growth to strengthen in the coming quarters.

The bank notified that the economic growth will be driven by the recent tax cuts, low level of interest rates, the upswing in housing prices in few cities, ongoing spending on infrastructure and a brighter outlook for the resources sector.

As per the central bank, the dwelling investment will continue to fall over the coming year, with a certain chance of trough in late 2020 before a revival in residential construction gets started through 2021. The bank noted that there is little sign of a pick-up in residential development activity in the early stages despite a stronger-than-expected upturn in established housing markets.

However, the bank has revised expectations of a revival in dwelling investment over 2021 upwards, partly indicating the greater-than-expected rise in established housing prices.

The bank anticipates persistence of positive labour market conditions over the next six months, with job vacancies staying at a high level and hiring intentions of firms remaining above average. Australia observed a fall of 0.1 per cent in the unemployment rate to 5.2 per cent in September 2019 in seasonally adjusted terms, with an increase of 14,700 people in total employment.

RBA expects the unemployment rate to stay above the rate consistent with full employment for the next couple of years (central estimate at 4.5 per cent). However, the bank mentioned that there is huge uncertainty around the amount of spare capacity currently is (and will be) in the country?s labour market. RBA anticipates a decline in the unemployment rate to 4.9 per cent by the end of 2021.

Though largely unchanged from August?s forecasts, the RBA?s economic outlook seems quite optimistic, especially around residential construction cycle which is likely to drive much-needed improvement in dwelling investment.