The Salt Lake City-based premium coffee firm intends to support the first responders, veterans of the US, and active-duty military officials. It claims to provide its customers with a great coffee and brand experience.

Black Rifle Coffee Company or BRC Inc. (BRCC) is among the most hyped SPAC listing this year, which started its trading on the New York Stock Exchange on February 10 through a merger with the blank check firm SilverBox Engaged Merger Corp I.

Let's discuss the current performance of the BRCC stock. 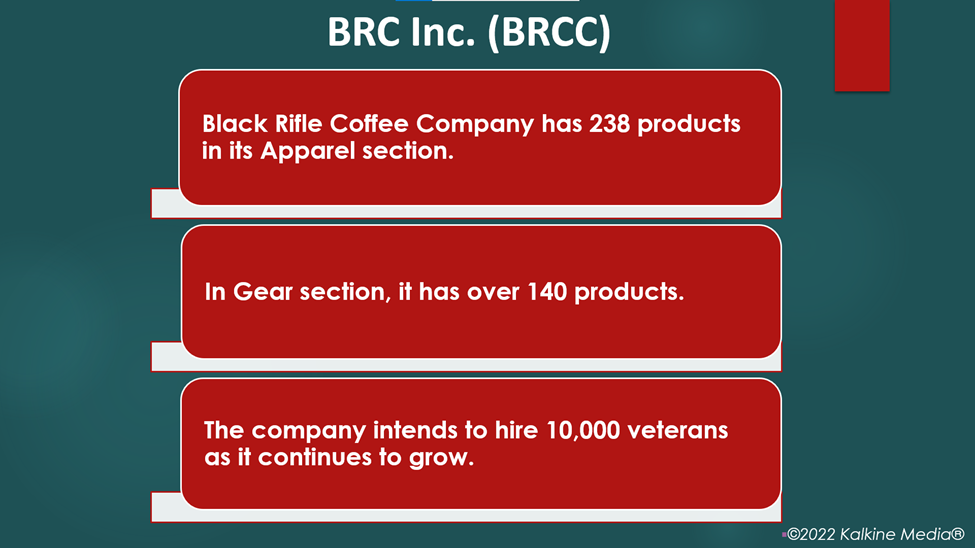 The stocks of BRC Inc. (NYSE: BRCC) have gained attention from the investors on Tuesday, as evident by the surge in its prices in the pre-market trading session. Its shares traded at US$17.72 at 7:40 am ET on March 8, up 5.35% from its previous close of US$16.82.

The company has a market capitalization of US$740.24 million. The premium coffee firm will release its fourth quarter and fiscal 2021 financial results on March 16, before the opening bell.

The growing coffee company Black Rifle is mainly known for its innovative and armed-themed coffee products like AK-47 Espresso Blend. Apart from selling coffee, it also focuses on supporting the armed force veterans and first responders. Notably, it sells apparel and creates digital content to support the cause.

Founded by Green Beret Evan Hafer in 2014, it generates most of its sales from online selling. However, it also sells its products through physical stores and outlets like Walmart.

Black Rifle Coffee Company reportedly carries a conservative image, which might boost its sales among the right-wing population. In March 2018, the company shared a picture of former US President Donald Trump and his autograph with the slogan "I only drink Black Rifle Coffee".

In comparison to the previous year, the IPO market is going through turbulent times due to various macroeconomic factors like the Omicron outbreak, and the recent geopolitical turmoil between Russia-Ukraine.

Even the SPAC mergers appear to have received a cold response from investors due to increased market volatility. However, Black Rifle Coffee Company stock has remained strong, and it could strengthen further if the market volatility subsides.

Also Read: What is Secured Ship (SHIP) and why is it rising?