Though not mandated by law, the government has recommended shoppers wear face masks Monday onwards, when the last of the Covid-related restrictions would be lifted on 19 July. The government has left it to firms to decide what their safety policies would be. However, major retailers like Tesco, Morrisons, Sainbury's and Marks & Spenser may lift the mask requirement in store.

As per the new guidelines, those working from home can get back to offices, and social distancing rules would no longer be applicable. Prime minister Boris Johnson said that it would be safer to unlock now rather than in September, as the approaching cold weather would mark the beginning of flu season. He also admitted that more deaths and hospitalisations are likely. 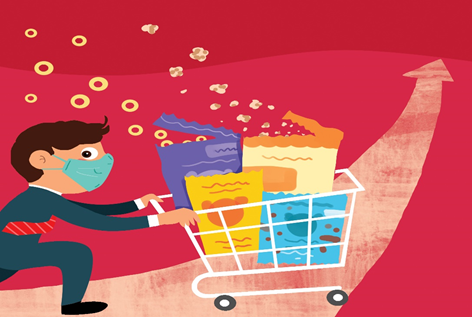 Johnson added that the pandemic was not over yet, and it continues to pose risks to citizens, making it impossible to revert to a normal life like before Covid instantly from 19 July onwards.

The government’s decision was criticised by workers unions, and TUC called the complete unlocking was a recipe for the rising rate of infections. Paddy Lillis, the general secretary of shop workers' union Usdaw, said that it was disappointing that the government came up with new guidelines without consulting employers and unions.

Here are 5 retail stocks that are likely to be impacted by the announcement:

The shares of UK’s biggest supermarket have a one-year return of 10.34 per cent. Having a dividend yield of 4.24 per cent, the stock holds a market capitalisation of £18,320.28 million. The shares have a price-to-earnings ratio of 19.74x.

The shares of one of the largest supermarket chains in UK have a one-year return of 40.92 per cent, with a market capitalisation of £6,358.48 million. The shares have a price-to-earnings ratio of 44.22x and a dividend yield of 2.72 per cent.

In a trading update for the first quarter ended 9 May 2021, the company said its total sales were up 5.3 per cent. Online sales increased 113 per cent, and wholesale sales increased 21 per cent. It said it was on track to meet its full year guidance. EBITDA would be up 2.4 times of 2019-20 levels. The company is reportedly waiting for the final government guidance for the mask.

The shares of the supermarket chain have a one-year return of 42.76 per cent and a market capitalisation of £6,335.52 million. The shares have a dividend yield of 3.75 per cent and a price-to-earnings ratio of 24.17x.

For the first quarter up to 26 June, the company’s like-for-like sales were up 1.6 per cent, and total retail sales increased 1.6 per cent as well. Online grocery sales saw a 29 per cent jump, and clothing sales were up 57.6 per cent. The company has said that it will follow what the government announces regarding the easing of mask rule.

The shares of the sports fashion retail company have a one-year return of 49.19 per cent and have a market capitalisation of £9,530.1 million. The shares have a price-to-earnings ratio of 28.70x and a dividend yield of 0.16 per cent.

The shares of the multinational retailer have a one-year return of 47.94 per cent with a market capitalisation of £2,840.74 million. The shares have a dividend yield of 2.69 per cent and a price-to-earnings ratio of 103.64x.