What will Robinhood’s new non-custodial Web 3 crypto wallet look like?

The Great Western Mining Corporation plc (LON: GWMO) released its operations update on 15 October 2020 in which it provided details about its roadmap to production. The company was well on track to produce gold and silver metals at Mineral Jackpot (MJ) properties, Nevada and the laboratory testing had been completed. Nevada is rich in minerals and is known as world’s most mining friendly state in terms of legal regulations.

These precious metals would be produced through the process of gravity separation in the medium term. However, a suitable leaching facility is being devised for the long term, which is expected to improve the rate of recovery. The company did not share the exact timelines for production as it was dependent on third party contractors for work completion.

Great Western Mining is into mining and exploration of copper, gold, and silver in Ireland, Britain, and the US. It is listed on the AIM index at the LSE. During the first half of the year 2020, the company had recorded availability of gold and silver from soil samples at two of its sites namely the Mineral Jackpot and the Rock House.

Brian Hall, Chairman of the company said Great Western would be producing gold and silver from spoil heaps at MJ properties, which shall prove their concept.

The company shares shot up by 3.92 per cent at the LSE on 15 October after the update was released. They closed at a value of GBX 0.27 on that day.

Also Read: Not Only Gold but Gold Stocks Can Also Be A Haven in The Time of Crisis

The mining group has also gained options to buy the Olympic gold project in the US. Exploration process has also been initiated at Nevada for the same, confirming the potential for gold enrichment.

According to the company, it is on track to attain its gold and silver production targets for the year 2020, despite the dampening impact of the coronavirus pandemic.  It is to be noted that travel of company officials between the US and Europe has not been possible post the advent of the global pandemic in March 2020. Despite that, the staff has worked in close coordination through other means like phone calls, emails, video conferencing etc. 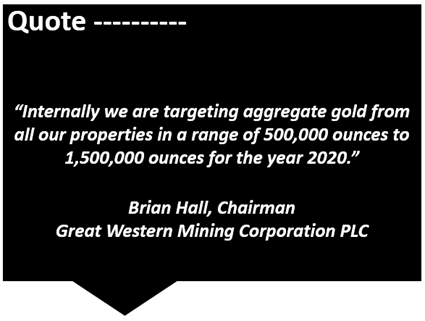 Apart from gold and silver, the company also owns 4.3 million tonnes of copper resources at its Black Mountain site.

At the company’s Rock House cluster of mines, gold was produced during the first half of 2020. Trenching was completed at its east and west sites. The activities of sample collection, magnetometer survey, and initial drilling are going on at the site.

Another of its crucial projects namely the Olympic Gold was acquired by the company in May 2020. It is located at the east-central Mineral Country, Nevada. The location is known to possess high grades of gold and silver. Magnetometer survey is going on at one of its sites. Further action plan will be based on the survey findings.

The mining and exploration company is presently targeting three precious metals areas for work during the second half of the year 2020 namely the Mineral Jackpot, Rock House, and the Olympic Gold. Despite a loss, its financial position remained stable and it is funded for all its projects for the year.

It is looking for industry partners with latest technology skills and funding potential to explore large sized copper resources.

Modern technology and equipment can greatly speed up work at the company’s un-exploited areas and Great Western Mining is looking out for capable associates in this regard.

The group is fast pacing the exploitation of gold and silver to begin their sale in 2020 itself, which is expected to add to its revenue in the current financial year itself.

Why is DIA crypto grabbing headlines?