Travellers flying into England are soon going to have an option to take a paid Covid-19 test after 5 days of self-isolation. If they are tested negative, a new scheme will allow them to halve the 14-day compulsive quarantine period, which is otherwise required. This scheme is aptly named the “test to release strategy” and would come into effect from 15 December this year.

The British aviation stocks got a boost on Tuesday after this announcement from the Department of Transport came in. Share prices of easyJet plc (LON:EZJ), British Airways owner International Consolidated Airlines Group (LON:IAG), and Wizz Air Holdings plc (LON:WIZZ) shot up by 8, 2, and 1 per cent respectively at the day’s closure on 24 November.

The flyers who opt for this scheme can book and pay for the test from a government-approved list of test providers.

The scheme is also applicable for people traveling by train or ferry.

Grant Shapps, the British Transport Secretary said that the plan would ensure that Britain’s route out of the pandemic was balanced, careful, and safe.

The government informed that it had evidence to demonstrate that a test after 5 days of self-isolation provided more reliable results than taking a test on the arrival day itself. It allowed the virus sufficient time to incubate and lowered the risk of false negative results. Results will typically be out within 1 or 2 days. 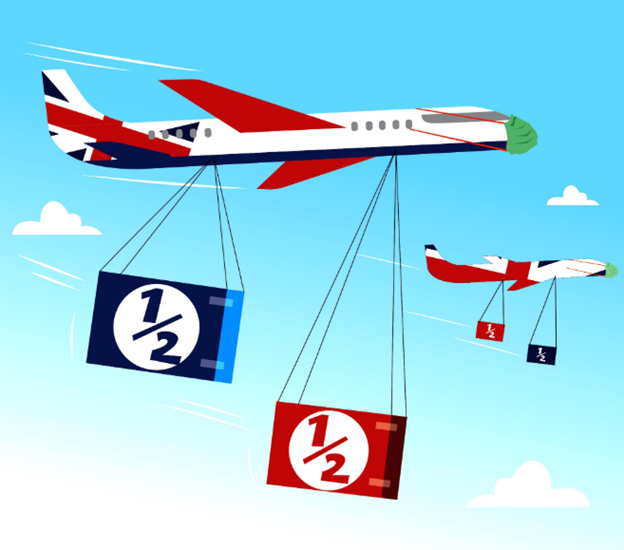 The cost of a private Covid-19 test usually falls in the range of £100-150 per person. For a family of four, this is a sizable addition to a winter holiday budget, should they plan for one.

Those who decide not to take the test while coming into England from a non-exempt nation will have to complete the two-week quarantine period.

Governments of Northern Ireland, Scotland, and Wales are also considering a plan on the same lines. 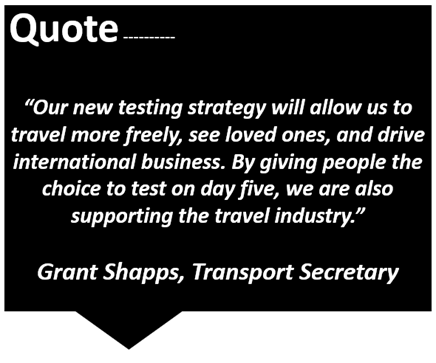 Airlines UK, the sectoral association for registered carriers across Britain welcomed the ‘test and release scheme’ and said that it offered light at the end of the tunnel for the aviation industry.

Tim Alderslade, chief executive, Airlines UK said that this move will see the demand for flying start to gradually return to normal.

In addition to this scheme, the association was also happy with the government financial support’s offered for airports and their ground handling staff across England. The support will start from January 1 and take care of the fixed cost liabilities to a significant extent.

The aviation industry is an important pillar of the British economy. It creates jobs and drives the growth. The new financial package for airports along with the test and release scheme would help the sector to a great extent, said Rishi Sunak, UK Chancellor.

At the same time, the airline industry has yet another item on their wish list. It is the need for a pre-departure testing system which is cheap and quick. This would allow self-isolation to be avoided altogether, until a vaccine comes around, the industry experts insist.

The British aviation stocks showed a positive reaction after the test and release scheme was announced.

The stock of Wizz Air Holdings jumped by 1.23 per cent to touch the level of GBX 4,600.00. The company has already secured a tie up that would allow its customers to book a Covid test for as low as £85 through a special discount.

The stocks of the world’s largest travel and leisure company TUI AG (LON: TUI) spiked up sharply by 14.54 per cent on the same day, touching a high of GBX 540.39.

Similarly, the cruise operator Carnival plc (LON: CCL) also saw its share price increase by a remarkable 10.4 per cent for the day to close at GBX 1,332.50.