Government Urged To Support People Left Out Of The Furlough Scheme

On 15 July 2020, the UK Treasury Committee released an interim report. It highlighted the existing gaps in fiscal stimulus being offered to businesses and individuals, through the Coronavirus Job Retention and Self-Employment Income Support Schemes. The report underlined four main groups of people who had been left behind. They were as listed below:

Newly employed or self-employed: According to latest statistics, around 50,000 people are taking on new jobs every month across the nation. Many more are setting up their own businesses too since April 2019, but they are not eligible for these furlough schemes.

Self-employed making an annual profit of more than £50,000: They are not eligible for the scheme as they are outside the government cap for the self-employment support scheme. According to estimates, close to 225,000 people fall in this category.

Limited company directors: Those directors who take a substantial part of their income in the form of dividends are only entitled to claim a small benefit under the coronavirus job retention scheme. Estimates suggest that around 710,000 individuals fall in this category.

Freelancers: People on short-term contracts and the freelancers are also not eligible for the existing government’s furlough schemes.

The people listed under these categories have been enduring financial hardships since the past few months, especially from 23 March 2020, when the lockdown was put in place across Britain, laments the interim report.

The Treasury Committee comprises of a group of members of parliament (MPs) who analyse the policies and expenses of the UK Treasury.

The committee has requested the government to protect employment and income of the people listed under the above-mentioned categories. The plausible option suggested by the committee to include these people could be extending the eligibility date to end of March 2020. Alternatively, the government could include signed employment contracts as the evidence for eligibility to the furlough schemes, as per the report recommendations.

Freelancers and newly-self employed should be given the same access furlough scheme as other eligible employees, the report adds. Further, the £50,000 cap on annual profits for self-employed businessmen should be removed. Limited company directors (who are getting a sizable chunk of their income as dividend) should also be eligible for financial support.

However, Sunak’s office has responded by saying that even though the Treasury agrees to the Treasury Committee report findings, but it maintains that the support schemes unrolled as the first response to the coronavirus crisis, were correct. It further added that any loosening of the eligibility criteria could lead to the furlough schemes’ misuse, and therefore should be best avoided.

But this is not the end. The argument continued and Mel Stride, Chairman, Treasury Committee felt that in their present form, these schemes are not accessible to as many people as is possible, defeating the main purpose for which they were set out for. He wanted the government to re-think on its stand, even though the furlough schemes are getting closer to their closure, slated for October 2020.

The furlough schemes in their current form

CJRS claims by the size of employer (in terms of number of employees), 30 June 2020 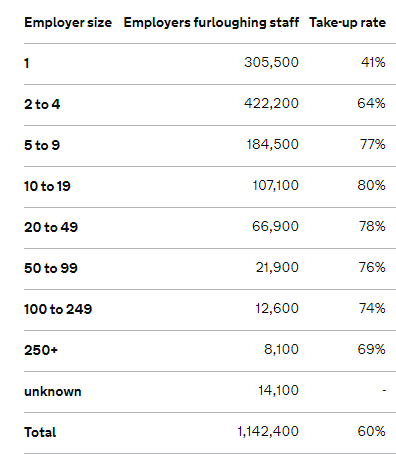 In terms of the employer size as measured by the total staff strength, businesses with 10 to 19 employees displayed the highest take up rate (80 per cent) till the end of June 2020. The number of businesses using the scheme were 107,100 for the same period.

Gender-wise distribution of SEISS claims made till 30 June 2020

Now that these schemes are slated to end by October 2020, it is unlikely that the government comes out with any revisions to close the gaps pointed out by the UK Treasury Committee. Moreover, Sunak recently announced another plan for jobs with a fiscal support worth 30 billion pounds. Nonetheless, the autumn budget might have some announcements, in case the Treasury is taking a note of these suggestions by the MPs.

So finally, government has provided billions of dollars of support to individuals and businesses to sail through the unprecedented economic slowdown, as a result of the coronavirus pandemic. This kind of massive support has never been offered before in the British history. Furlough schemes for employees and self-employed individuals have supported 12 million people till the end of June 2020. However, the cross-party committee blames the UK Treasury for leaving out more than a million people from accessing the schemes. These people belong to the categories of newly employed or self-employed, self-employed making an annual profit of more than £50,000, limited company directors getting substantial dividend income, and freelancers. Sunak’s office, on the other hand, puts a defensive argument by saying that if the eligibility criteria are relaxed to include them, these schemes would be open to misuse, which is not advisable.