Berkeley Energia Limited (BKY) is focussed on producing clean, high impact energy from its fully owned SALAMANCA project. Berkeley conducted a feasibility study and confirmed that the project will be one of the cost-effective producers, capable of generating strong cash flows. The project had a Net Present Value of US$531.9 million discounted on 8 per cent annually with an Internal Rate of Return of 60 per cent.

The operating costs are incurred in Euros and revenues are recognised in US Dollars; the project shall benefit from the deflationary pressures within the European Union.

The uranium project is expected to be world class and is being advanced in a mining area of historic importance in Western Spain, located about three hours west of the capital.

Post the recent approval from the cabinet, the Company has now got all the awaited approvals which were required for starting operations ranging from National permits to European Union in the region.

This project will also benefit the rural community in terms of upliftment from depression, as it will generate several social and environmental benefits in the form of jobs and skill-training.

Berkeley Energia Limited confirmed the commencement of its six-hole (out of thirteen) drill programme to test for critical battery and EV metals in Western Spain. It has a major licence holding in the region. Berkeley holds licenses across a mineral-rich province with over 12,000 sq. km area, which has a rich history for a variety of minerals and metals across several periods.

The thirteen-hole (3,350m) exercise is dedicated to the exploration of lithium, cobalt, tin, tungsten, out of which some of them have been historically extracted for commercial use in this region. The Company will consistently review the engineering design of the project.

The targets have been generated through detailed exploration for a wide range of minerals over the past two years and further refined using the innovative Ionic Leach programme.

The ionic leach process is one of the latest techniques developed to analyse metals at depth without drilling; it utilises ultra-high detection levels of mobile metal ions in the soils at the surface. This is the first time this innovative technology has been deployed in Spain.

Even the small deposits of metals and minerals, which are not easily detected and involve a significant amount of drilling (hit and try approach) used to be a cumbersome process of extraction, will now be resolved by deploying The Ionic Leach methodology. It reduces the amount of drilling required by generating highly defined (accurate) targets significantly, thereby reducing time and effort.

The results obtained from this drill exercise will be saved in a database to find insights about more accurate and refined deposits (targets). This analysis of metal and mineral endowment will enrich the value added across the mineral-rich province.

Initially, the company will be targeting is in the West direction of the license area, which is 50 kilometres from Retortillo which was historically mined for Tin, Lithium (high-grade) with significant cobalt anomalies.

Furthermore, the company has been granted a new license for 31 sq. km area which is believed to have Lithium and Titanium and is in proximity to the areas being currently drilled.

The result of the recent municipal election in Retortillo (a village in Salamanca project) is appreciated by Berkeley Energia Limited and it has been granted licenses for battery and EV metals, which are huge prospects for the company.

Four out of Five seats in the council were won by the candidates, who were backed by the company. The Company has received positive feedback on assessments from various regulatory bodies with regards to the pre-operational Surveillance Plan (Radiological and Environmental Affections) and the pre-operational Surveillance Plan (Control for the Underground water).

A report on recommendations from the Nuclear Safety Council is awaited by the company. The company along with others has appealed on the recent appointments to the Board of the Council and looks forward to ruling by the Supreme court on this matter.

In addition, three new licenses for an area of 266 sq. km located 40 km from Retortillo are granted to Berkeley Energia Limited. The company has also applied for twelve new investigation licenses for all the other elements spread across an area of 350 sq. kilometres.

Previously, the Ionic Leach methodology was used to conduct geochemical analysis. The analysis depicted the battery, EV metals Lithium, Cobalt, Tin, Tungsten and rare earth elements to be great prospects for the company. The company is devising plans for testing these targets.

Recently, Berkeley Energia Limited had issued 60k ordinary shares to a key consultant of the Company. The company has applied to the London Stock Exchange for the new ordinary shares, in addition to Company's existing issued ordinary shares, to be admitted to trading on the LSE (as depository interests). 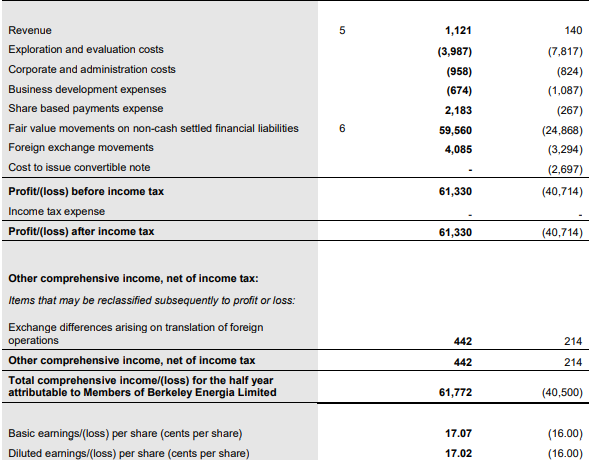 The company enjoyed (Non-cash) share-based payments gain of AU$2,183,000 during the period. This was recognised in respect of incentive securities granted to directors, employees and key consultants.

The fundamentals for uranium seem very strong. The uranium price in the spot market continued to strengthen during the half-year, ending at US$28.50 per pound. The company has a contract for the first six years of around 2.75 million pounds of Uranium Oxide, with a further option of 1.25 million pounds, at a mean price of around US$42 per pound.

Daily Chart as at June-27-19, before the market close (Source: Thomson Reuters)

At the time of writing (as on June 27, 2019, at 08:30 AM GMT), shares of Berkeley Energia Limited were quoting at GBX 19.75 per share; which was exactly same as yesterday's closing price level. The company had a market capitalisation of £51.20 million.

The shares of the company (at the time of writing) were trading above the 30-days and 60-days SMA, which shows a positive trend in the stock price movement and could further move up from the current trading levels.

In the past 1 year, shares of Berkeley Energia Limited have delivered a negative price return of 46.98 per cent. However, on a year-to-date basis, the stock was up by approximately 132.35 per cent and plunged by 11.24 per cent in the past three months.