Why these 4 NZX value stocks are worth following in October

Stocks trading at less than price relative to their fundamentals, healthy dividend yields, low P/B and P/E ratios can be termed as value stocks. Value stocks are known to be performing better during a high-inflation period.

As per the latest data of Stats NZ, the annual inflation has been recorded at 4.9% in September this year versus pcp. The current annual movement is being touted as a major one as the inflation of this level was last seen amid June 2010-2011 quarters when it reached 5.3%.

On the given backdrop, we have zeroed on 4 NZX-listed value stocks. Let’s get apprised of them. 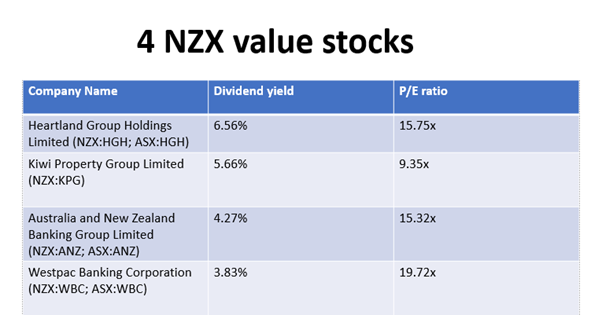 The Company has notified the market about its only virtual Annual Meeting, scheduled to be held on 28 October online because of the COVID-19 alert level status in NZ.

Why these 4 NZX value stocks are worth following in October

The stakeholders would be expected to give their stakeholders number for the verification process. They would be enabled to look at the presentation and cast their votes on resolutions and even raise queries via the online platform.

Functional for 25 years now, Kiwi Property Group Limited is in the know-how of investment and asset management. On 19 October, Kiwi Property ended the trading session at NZ$1.155, higher by 0.43%.

A few days ago, Kiwi Property notified the market that it had given its consent to purchase 385 Mt Wellington Highway, located next to Sylvia Park Lifestyle, in Auckland city for an amount of NZ$27.5 million. The deal is set to be finalised by 24 June next year.

On 11 October, the Banking Group announced Farhan Faruqui had joined it as the Chief Financial Officer.

Another banking and financial services group, Westpac Banking Corporation, is based in Sydney.

Last week, the Company notified that its net profit and cash earnings in 2H21 would be lessened by AU$1.3 billion (after tax) because of notable items.

Some of the notable items comprised AU$965 million (write-down of assets) in Westpac Institutional Bank. Apart from that, further provisions for consumer refunds, related costs, etc., of AU$172 million.

Did you read; Westpac cuts fee for KiwiSaver scheme to help people reach their investment goals

Value stocks are generally long-term investments which call for a cautious stock range, and the patience to stick to the stock for a longer duration is a pre-requisite.