The retail industry of any country consists of all companies that sell goods and services to customers. Grocery, convenience stores, department stores, specialty, are some of the retailers.

Auckland is currently facing an Alert Level 3 lockdown with the rest of the country at Level 2 to help NZ reduce the spread of the delta variant of COVID-19. This has put huge pressure on businesses and is a cause for concern for retailers around the country.

Let’s cast a glance at the performance of these 5 NZX retail stocks. 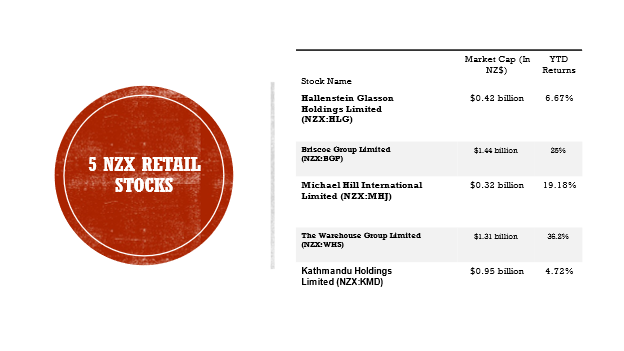 Hallenstein Glasson, a retailer for menswear and womenswear, reported pleasing sales figures for 12 months ended 1 August 2021 amid a challenging environment.

Sales numbers witnessed a rise of 21.9% on pcp to $350.76 million for the period with all brands witnessing strong growth as stores reopened after the 2020 lockdowns.

However, Group sales saw a drop of 18.9% on the previous year during the first 8 weeks of FY22, majorly driven by multiple store shutdowns across NZ and Australia.

Briscoe Group, a leading retailer in NZ, released its interim report for the 26 weeks ended 1 August 2021. The Group produced outstanding results in a challenging retail environment.

ALSO READ: Which are 5 NZX retailers with decent YTD returns in Q4?

BGP sales were negatively impacted by nearly $17 million in the last 2 weeks of August 2021. The Group expects that pent-up demand would drive sales levels from October to 30 January 2022, but uncertainty remains.

Michael Hill, an NZ-based jewellery retailer, reported strong same store sales numbers for the 13 weeks ended 26 September, up 15.5% on Q1 FY21 and a margin growth of 100 to 200 bps in all markets and channels.

ALSO READ: Michael Hill (NZX:MHJ) How did it perform in the latest quarter?

WHS recently announced Sarah Kearney as the Group’s Chief Digital Officer. She had joined the Warehouse group in August 2017 as Group General Manager, E-Commerce, and was most recently working as the Tribe Lead, Customer Engagement.

Sarah will take over Michelle Anderson who has resigned from WHS and will leave the business at the end of 2021.

Kathmandu Holdings, a travel-related clothing and equipment provider, posted a 110% increase in underlying NPAT to $66.3 million and recorded high sales numbers in FY21. Strong results came at the back of strong sales from KMD’s both Rip Curl and Oboz brands.

RELATED READ: Kathmandu (NZX:KMD): Which brands do the Company own?

The Group expects its H1 FY22 profit to be lower than that of H1 FY21.

Retailers are facing increased cost pressures, rental payments and a scarcity of stock across Alert levels 2 and 3.